CAN DANCE IN AN EMPTY TOMB? 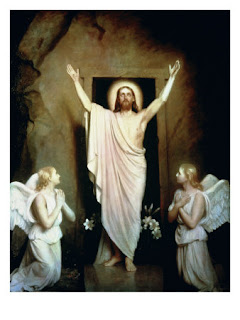 Dr. Arnold Levin taught in the Religion Department at Augustana College, Rock Island, when I was a student there many years ago. He introduced me to the critical tools that scholars use to study the Bible. I don't think I ever told him thank you.

Though it is probably not fair for me to say it, I sometimes thought that Dr. Levin took a special delight in tormenting Fundamentalist freshmen. I remember a particular class session in which he had us compare the resurrection accounts from Matthew, Mark and Luke. He asked the question, "How many angels did the women encounter at Jesus' empty tomb?"

The Gospel of Mark tells us that the women met "a young man dressed in a white robe." Matthew describes vividly how "an angel of the Lord" whose appearance was "like lightning, and his clothes white as snow" descended from heaven, stunning the guards at the tomb and declaring Jesus' resurrection to the women. Those guards, by the way, only appear in Matthew. Luke's Gospel says that the women met "two men in dazzling clothes."

Students who came from faith traditions that stressed the inerrancy of Scripture often had a hard time with Dr. Levin. Some of them thought that Dr. Levin was the devil, or at least one of his minions, come to destroy faith. Those students must not have attended chapel on Wednesday evenings.

I used to see Dr. Levin in campus church, paying close attention to the sermons, sometimes jotting notes, occasionally preaching himself, standing to sing the hymns loudly and lustily. Dr. Levin was a person of faith. Perhaps without intending it, Dr. Levin taught me that one can read the Bible critically, carefully, closely, intelligently and even question its facticity and still be a person of faith. I don't think I ever thanked him for that either.

So, let this blogpost stand as my belated appreciation for Dr. Levin with gratitude for the things he taught me.


Danish artist Carl Bloch painted the image of the resurrection accompanying this post. He apparently agreed with Luke (contra Matthew and Mark) that there were two angels at the empty tomb.  The Gospel of John, we may note, also agrees with Luke and Bloch.
Posted by Brant Clements at 7:04 PM