THE YEAR OF BLOGGING BIBLICALLY: DAY 102 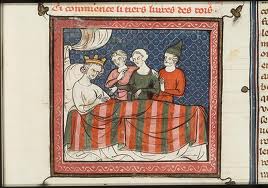 David, son of Jesse, the bold youth, mighty warrior, and great king is made rather pitiable by old age. Death mocks us all.

When the king is unable to keep warm, his servants recruit a new woman for his harem, a beautiful Shunnamite woman named Abishag. She serves as a kind of human bed warmer. David, we are pointedly told, sleeps with her but does not sleep with her (Nudge, nudge. Wink, wink. Say no more). The king's sexual prowess has abated.

As is typical for women in these biblical narratives, no one asks Abishag how she feels about the arrangement. On the other hand, Bathsheba, the wife David stole from Uriah the Hittite, shows signs of agency in these early chapters of 1 Kings.

A little background: There was a list of David's sons back in 2 Samuel 3. Amnon, David's firstborn is dead, murdered by his half-brother Absalom in revenge for the rape of Tamar. The second son, Chileab, is out of the picture. He is mentioned only once in Scripture. What became of him? No one knows. Absalom, the third born, and the only son with a royal mother is also dead, killed in war by David's unpredictable general Joab (a fact of which David is apparently unaware). Adonijah is the name of David's fourth son.

With the king enfeebled, Adonijah, backed by Joab and the priest Abiathar, makes a play for the throne. Bathsheba conspires with the prophet Nathan to have David declare her own son, Solomon, king instead. Did David really promise the throne to Solomon or is this a lie?

Is this another case of the youngest son triumphing as we see so often in Scripture?

Whatever the case, Solomon ascends to the throne and Adonijah cowers, taking sanctuary at YHWH's altar.

After David's death, Adonijah--through Bathsheba--requests a favor of Solomon. He wants to marry David's beautiful, virgin concubine Abishag. Having sex with another man's woman asserts one's superiority over that other man. Solomon has Adonijah put to death in spite of the fact that Adonijah has sought sanctuary at YHWH's altar.

Abiathar the priest, who supported Adonijah's bid for the throne, is removed from office. Shimei is placed under house arrest. When he breaks the terms of his arrest he is executed.

Violence and palace intrigue mark the beginning of 1 Kings. God is good, but politics is dirty business.