THE YEAR OF BLOGGING BIBLICALLY: DAY 267 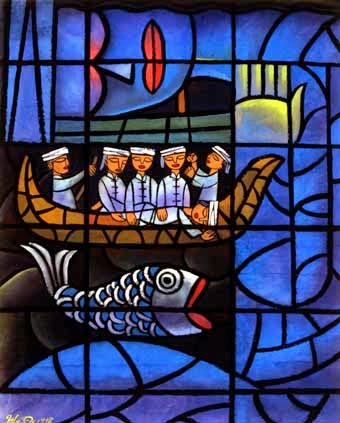 Obadiah is the shortest book of the Hebrew Bible, a mere 21 verses in length. It consists entirely of an oracle against the nation of Edom. The prophet also refers to that nation as Esau, after its ancestor, and Teman, after one of its important cities. See verses 8 and 9 for all three of these titles. Esau, you will remember was the brother of Jacob. The Israelites considered the Edomites kindred though not always friendly. In this book, Edom is condemned because, when Israel was taken into exile, the Edomites did nothing to help and, in fact, gloated over Israel's fate.

Every Sunday School student knows that Jonah was swallowed by a whale. Actually it was a "big fish" but why quibble? The book presents a parable about a reluctant prophet. The story is a fantastical, comic masterpiece. When YHWH tells Jonah to preach in the Assyrian capital, Ninevah, he instead books passage on board a ship headed to Spain. When YHWH sends a sea storm that threatens to wreck the ship, the pagan sailors reluctantly, at Jonah's insistence, toss the prophet overboard. The storm stops. The sailors all worship YHWH. Already, Jonah is making converts.

Jonah is swallowed by the big firsh and spends three days in its belly. He fills his time praying a psalm that, on the surface, sounds perfectly pious. A close reading reveals that Jonah mistakenly believes that YHWH is confined to the temple back in Jerusalem. We can't be sure how God reacted but, when Jonah finishes his prayer, the fish pukes.

Jonah finds himself on the shore near Ninevah. The city is described in exaggerated terms. Jonah, seeing no way out, goes partway into the city and preaches the most lackluster prophetic sermon ever.

"Forty more days and Nineveh will be overthrown."
(Jonah 3:4, NIV)


Then he leaves the city and sits down to watch the fireworks. Once again, Jonah's worst efforts meet with unparalleled success. By royal decree the entire city puts on sackcloth and ashes. Even the cattle! YHWH relents and everyone lives happily ever after.

Jonah wanted Ninevah to be destroyed. He also knew all along that YHWH is:

a gracious and compassionate God, slow to anger and abounding in love, a God who relents from sending calamity.
(Jonah 4:2, NIV)

There is an episode involving a plant that springs up overnight and gives Jonah shade. Then, YHWH sends a worm to destroy the plant which only makes Jonah angrier. YHWH drives his point home:

But the Lord said, "You have been concerned about this plant, though you did not tend it or make it grow. It sprang up overnight and died overnight. And should I not have concern for the great city of Nineveh, in which there are more than a hundred and twenty thousand people who cannot tell their right hand from their left—and also many animals?"
(Jonah 4:10-11, NIV)


The book of Jonah probably comes from the same time as the books of Ezra and Nehemiah, the time when Jerusalem was being rebuilt. It serves as a counter-voice to the concern for ethnic purity evinced in those other works.

Arguments that Jonah is a reliable account of historical facts couldn't be further from the point of the book. The prophet is not Jonah, son of Ammittai, but the anonymous author of this wonderful little book.

The illustration of Jonah is by Chinese artist He Qi. See more of his wonderful artworks here.

Next: Micah
Posted by Brant Clements at 9:39 PM