THE YEAR OF BLOGGING BIBLICALLY: DAY 250 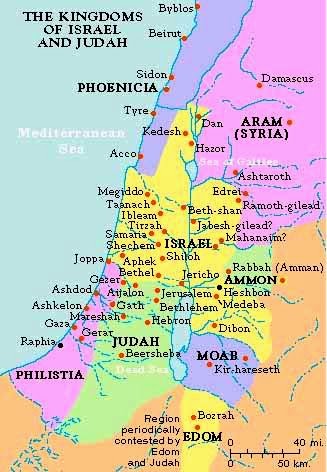 Ezekiel now turns his attention to Judah's neighboring nations. In chapter 25 verses 1-7, he prophesies against Ammon. In Jeremiah 40 we read that the Ammonites were responsible for the assassination of the Babylonian appointed governor Gedaliah. Ezekiel says that they rejoiced over the fall of Jerusalem. They will, the prophet says, be laid waste by "people from the east," probably nomadic raiders.

Next Moab falls under Ezekiel's gaze (vv. 8-11). The Moabites assisted the Babylonians against Judah. They will share Ammon's fate.

The chapter ends with an oracle against Philistia. Israel's ancient enemies will also fall.

Ezekiel 26:1-28:16 contain a series of oracles against Tyre. The Tyrians gloated over Jerusalem's destruction and saw in it an economic opportunity. The will be laid waste by the Babylonian King Nebuchadrezzar ( whose name the NIV helpfully "corrects" to Nebuchadnezzar). He is described as the "king of kings" (Ezekiel 26:7). Tyre's destruction is described in terms of warfare and, appropriately for a merchant seaport, ocean storms.

Chapter 27 is a mocking "lament" for Tyre. The glories of Tyre's ships, armies, wealth, and trading prowess are described. Tyre's trade partners will mourn its demise.

All who live in the coastlands
are appalled at you;
their kings shudder with horror
and their faces are distorted with fear.
The merchants among the nations scoff at you;
you have come to a horrible end
and will be no more.
(Ezekiel 27:35-36 NIV)


That's all for today. We'll get back to Tyre next time.