THE YEAR OF BLOGGING BIBLICALLY: DAY 125 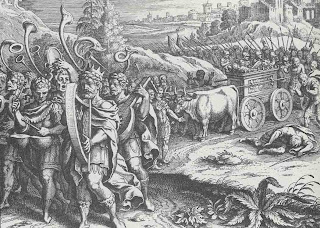 Did I mention that everyone loves David?

1 Chronicles 12 begins with a flashback to David's time at Ziklag. While he is there an army begins to gather around him including, notably, some ambidextrous Benjaminites, members of Saul's own tribe. One Benjaminite soldier, a certain Amasai,whose name occured in chapter 6 before plays the prophet. Inspired by "the spirit" he proclaims loyalty to and peace upon David.

At Hebron, where "all Israel" had gathered to anoint David king, the ranks of his army swell even more. Interestingly, the more remote tribes send far greater numbers of soldiers. David is no mere tribal leader. He rules the entire nation.

Chapter 13 recounts David's first attempt to bring the ark of the covenant to Jerusalem. Saul, David says, disregarded the ark. Chronicles again emphasizes the unanimous support of Israel's leaders for the undertaking. Details of the story vary from the account in 2 Samuel 6, but hapless Uzzah still dies for touching the ark. For the time being, David leaves the ark in the keeping of Obed-edom the Gittite (i.e. a Philistine ex-pat). The name Obed-edom is elsewhere applied to a gatekeeper and a singer, Levitical temple functionaries. Are these the same person? Obed-edom prospers while the ark is in his keeping.

David prospers, too. His predecessor Saul showed up in 1 Chronicles just long enough to die in an ignoble fashion, along with his sons, and have his head displayed before the idols of the Philistines. All because Saul was not faithful. By way of contrast David acquires wives, sons, daughters, and wealth. The model of faithfulness, David lets YHWH determine his battlefield strategy, defeats the Philistines, captures their idols and burns them in keeping with Deuteronomy 7:5 and 12:3.

In the parallel account found at 2 Samuel 5:21 David and his troops captured the Philistine idols but no mention was made of them being burned. It seemed there that the idols were kept as spoils of war.

Chapter 14 ends with a note that David's fame spreads internationally. YHWH brings the "fear of David" on all lands.

Okay, maybe not everyone loved David. At least those who don't love him fear him.