The Bible Wasn't Written to You 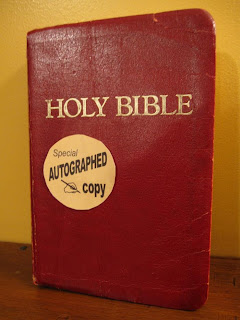 Every day she would open her Bible to a random page, read what was found there, and try to apply it to her life. She used the Bible superstitiously. She used it for divination.  She believed that the Bible was written to her.

One day she read a verse, I think it was from Isaiah, and became convinced that God had promised her many children. Sons. At least three of them. Her biological clock was ticking. So, without informing her husband she quit using birth control. She had a son but was soon after divorced. Within a few years she remarried and had another child, not necessarily in that order. This time it was a daughter. Then the mainspring on her biological clock ran down. Like Sarah, she passed the age of childbearing. Short of a Sarah-like miracle the many sons she believed God promised her will never materialize.

Her story is, to the best of my knowledge, factual. She may be an extreme example, but let hers be a cautionary tale for us all. The Bible was not written for us.

The Old Testament was written for ancient Hebrew speakers. For Israelites, men mostly. For priests serving in the Jerusalem temple. For Judahites in the Babylonian exile, trying to make sense of their experiences.

The New Testament was written for first (and maybe early second) century Christ followers. For people who expected Jesus' immediate return. For Jewish-Christians trying to figure out what the destruction of the temple meant. For believers living under the oppression of the Roman Empire. For Ephesians, and Galatians, and Philippians, and the members of 7 churches in Asia Minor. And others. But not us.

This doesn't mean that there is nothing in the Bible for us. We just have to use our heads to get at it.

Context is key to biblical interpretation. A verse must be understood within its chapter. The chapter within its book. The book within the canon. Knowledge of the situations for which the various books of the Bible were originally written increases our understanding. Only when we understand the Scriptures can we begin to apply their message to our own lives.