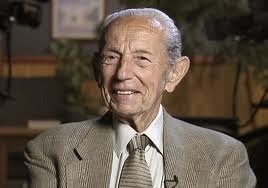 I only learned of Harold Camping's death yesterday, two days after the fact. It has taken me a full day to think of how I might respond to the news.

Harold Camping was the radio preacher who famously predicted that Jesus would return to rapture all true believers out of the world on May 21, 2011. After a short time of tribulation, he claimed, the world would be destroyed on October 21 of that same year. For a while Camping provided plenty of fodder for this blog. He was responsible for a huge spike in readership in May 2011. Now, at the age of 92, Harold Camping is dead.

I don't think Camping was deliberately evil. He was simply wrong. Unfortunately, he convinced others to share in his delusion, some of whom could ill afford it. I feel badly for those who committed their time and resources to promoting Camping's strange biblical interpretations and failed predictive schemes.

I also feel badly for Camping's friends and family. Surely they mourn his death. I pray that they will be comforted.

As for Camping himself, I can only entrust him to the hands of God who is gracious and merciful.