THE YEAR OF BLOGGING BIBLICALLY: DAY 190 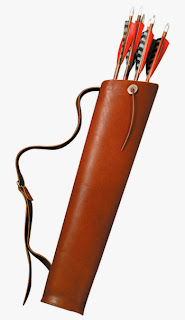 Today we have seven more Psalms of Ascents.

Psalm 136 recalls the return from exile and asks for God's help again. Based upon the water imagery in this psalm, the New Interpreter's Study Bible (NISB) guesses that the occasion might be a drought.

I thought that Psalm 72 was the only psalm attributed to Solomon. I was wrong. Psalm 127 is also a psalm "of Solomon." That this psalm reflects the wisdom tradition would be reason enough for the attribution. The NISB suggests that the attribution may have something to do with the word "beloved" (yahid) in verse 2. This, it says, is a play on "Jedidiah," a Solomonic family name. Could be, I guess. What do I know?

No matter the attribution, Psalm 127 is a reflection on the vanity of any human endeavor undertaken without YHWH. Verses 4 and 5 speak of the blessing of having sons. Sons in ancient Israel were an asset. They carried on the family name and contributed to income. Daughters were a drain. These verses also give the name "Quiverfull" to a fundamentalistic Christian movement that encourages its members to have lots and lots of babies...and so, as I understand it, take over society for Christ. Quiverfull adherents eschew the use of birth control thereby giving God charge over conception.

Probably the movement's best-known adherents are Jim Bob and Michelle Duggar who, for a while had a reality show on TV called 19 Kids and Counting.

Psalm 128 is similar in theme to Psalm 127. It states that those who trust in YHWH are blessed with children and long life.

Psalm 129 is another psalm that uses the cue "Let Israel now say...."  It is the prayer of an individual, but seems to be intended for communal use. It speaks of enemies who have not prevailed in the past and asks that they not be allowed to prosper in the future.

Psalm 130 is the sixth of the seven "Penitential Psalms." It is often called by its Latin title De Profundis ("Out of the Depths"). The psalmist places trust in YHWH's forgiving character and invites the community to share in that trust with the hope that it brings.

Psalm 131 is attributed to David but, of all the psalms, has the best chance of having been written by a woman. It expresses quietude of soul that comes from childlike trust in the Lord. In verse 2 there is an open question as to whether the psalmist identifies herself with the mother or the weaned child:

But I have calmed and quieted my soul,
like a weaned child with its mother;
my soul is like the weaned child that is with me.

Either way, the feminine imagery is unusual.

I have a negative reaction to this psalm. It seems to express the willful ignorance that is a characteristic of some American Protestantism. Anti-intellectualism is rife among Fundamentalists. I don't think that's what the psalm is actually about, but it can be read that way.

Psalm 132 recalls 2 Samuel 5-6, where David captured Jerusalem and brought the ark of covenant there. The NISB notes suggest that this psalm may have been a liturgy for a regular commemoration of those events. The psalm extols Davidic kingship. For David's sake, it says, YHWH blesses Zion.