The always interesting online magazine Religion Dispatches has taken notice of the sexuality controversies in the ELCA in an article titled "A Reforming Tradition Struggles with Change "by Brent Hege of Butler University. A teaser:

What are the issues at stake in these discussions? First, I put the term “confessional” in quotes because I consider its use in this context to be disingenuous; it implies that only those Lutherans who are opposed to the full inclusion of LGBTQ Lutherans are faithful to the historic confessions of the Lutheran Church (The Book of Concord). It also assumes that the supporters of full inclusion are apostates who willfully abandon scripture, tradition, and the confessions to appease contemporary cultural sensibilities.

Really, read it.
Posted by Brant Clements at 7:42 PM No comments:

OR, A TALE OF TWO ICEBERGS

The Straw Man argument is a logical fallacy. You hear it a lot on political talk radio. It goes like this: Party A makes a recognizable caricature of Party B's position. Party A then argues against the caricature as if it were Party B's position. Straw Man arguments can carry a certain emotional resonance. They can even fool the inattentive. But careful observers will recognize that while Party A has kicked the stuffing out of a straw man, Party B's true position is left unscathed.

I came across a classic straw man on the Faithful Transition website. If you are not familiar with it, the website's masthead describes its purpose thus:

Sponsored by the WordAlone Network, this website is meant to provide guidance to individuals and congregations who are seeking to affiliate with LCMC (Lutheran Congregations in Mission for Christ) and/or the new church body NALC (North American Lutheran Church) being designed by Lutheran CORE.

I actually do not object to Faithful Transition's purpose. For those whose conscience is so bound that they can no longer remain members of the Evangelical Lutheran Church in America (ELCA), some helpful guidance might be useful. But about that straw man, the cartoon below was posted on May 15 by Pastor Steve King under the title "We've Hit What?" 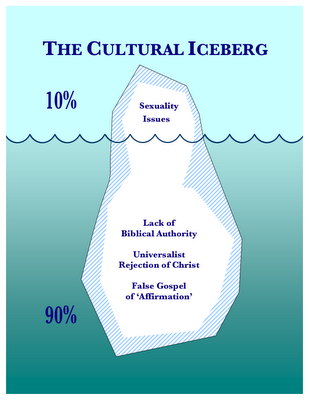 I have to wonder just how this cartoon furthers Faithful Transition's stated purpose. Maybe half-truths, misstatements and distortions of this sort make it easier for the disaffected to leave the ELCA.

Understand, I am about as ELCA as a person can get. I agree with the 2009 Churchwide Assembly decisions regarding sexuality and standards for ordination. I even agree with the "local option" which allows congregations to refuse same-sex partnered clergy. I know that this cartoon is supposed to represent the ELCA's positions, but frankly, I do not recognize myself in it.

I have a strong understanding of biblical authority. It is not identical to WordAlone's, of course. I like to think that it is more reasoned and consistent. I reject "Lack of Biblical Authority" as a label that sticks to the ELCA.

I have argued elsewhere against the idea that the ELCA has embraced Universalism. So, "Universalist Rejection of Christ" is nonsensical as far as I'm concerned.

As for "False Gospel of 'Affirmation'" I am not entirely sure what that means. It is another rather nebulous charge along the lines of "Gospel of Inclusion" or "Gospel of Conformity." I would guess that "Affirmation" is supposed to mean something like Gospel without Law. If so, then this, too, is a distortion of both my position, and, as I understand it, the position of the ELCA.

When I first saw the cartoon, I thought, "Two can play at that." So I did Google search for images of icebergs, found one at this website, and used MS Paint to add some text. The result: 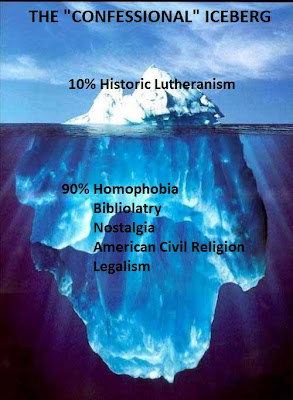 When I got done with my little art project, I looked at it and thought, "I'll bet that WordAloners looking at my cartoon would recognize themselves in it about as much as I recognized myself in their cartoon." Building straw men is fun. Kicking them to bits is even more fun, but in the end, what purpose does it serve? It only occasions anger and creates division. It may also violate that pesky Eighth Commandment, you know, the one about bearing false witness.

So, here's the deal. WordAlone, cut the crap. If you must leave the ELCA, leave. If your conscience is bound so that you must stay and disagree, then stay and disagree. But let's all quit building straw men, shall we? Let's show a little respect for one another's positions.

OR, HOW JOB CONFOUNDS OUR ORTHODOXIES

The Book of Job is a wonderfully rich theological treatise on human suffering. It seems to me that it is woefully underused, and sometimes misused, by Christians.

The Revised Common Lectionary (RCL), the cycle of Scripture readings used by many mainline churches, prescribes two passages from the Book of Job in the course of three years. There is an option in year B of the RCL for another four "semi-continuous" readings from Job. (I may need to take that option in 2012). Other than that, our Evangelical Lutheran Worship hymnal has a reading from Job in the Easter Vigil service and also suggests four and one-half verses from Job as a possible lection for use at a funeral.

Since the Book of Job is made up of long and carefully reasoned arguments, it is difficult, I think, to take excerpts from it for liturgical use.

Occasionally I will see someone suggest that Job 26:7 "proves" scientific knowledge on the part of its author:

[God] stretches out the north over empty space. He hangs the earth on nothing.

And again, Young Earth Creationists will sometimes use the Book of Job's description of Behemoth as "proof" that humans and dinosaurs co-existed on earth.

[The Lord said,] "Look now at the behemoth, which I made along with you;
He eats grass like an ox.
See now, his strength is in his hips,
And his power is in his stomach muscles.
He moves his tail like a cedar;
The sinews of his thighs are tightly knit.
His bones are like beams of bronze,
His ribs like bars of iron...." (Job 40:15-20)

I am not entirely sure what the Behemoth is supposed to be, but on the basis of sound scientific evidence, I am quite sure that human beings and dinosaurs did not live at the same time. It is sad to say, but those Flintstones cartoons I loved as a child had it wrong.

The Book of Job, for all its theological wealth, does not yield much for Christians who mine the Bible for proof-texts.

I think, though, that the main reason that Job is so little and so poorly used by Christians is this: Job's three friends represent a kind of orthodoxy. In their arguments they defend a traditional view of God's nature. At the end of the book, however, they are shown to be utterly wrong. The Book of Job contradicts and questions the orthodoxy of a large portion of the Hebrew Bible.

Maybe this is what makes Job such rich reading. Maybe this is Job's enduring value: it encourages us to question our own orthodoxies. Maybe this is the lesson we should take away from the Book of Job: no matter how orthodox our conception of God, God is something greater, something more. God cannot be contained in our doctrines.

It's in the Bible.


I found William Blake's illustration of the Behemoth and Leviathan here. Scripture quotes in this post were taken from the New King James Version.
Posted by Brant Clements at 9:41 PM 1 comment:

I read from the Bible every day. At least I try to. Last Friday I re-read the Book of Job. I do not know how many times I have read that book now. I love it. It is a wonderful, deep, philosophical treatise on theodicy, that is, the problem of unjust suffering.

The book begins with a prose prologue describing Job as a wealthy and righteous man. God loves Job, but Satan, who in this book is a member of the heavenly court, argues that it is easy for Job to be righteous. Take away Job's material blessings, Satan says, and Job will curse God. God allows Satan to do what he proposes and, in a series of disasters, Job loses everything: flocks, herds, servants, even his ten children, and finally his health. Job is reduced to sitting on a dungheap, scraping his festering skin with a potsherd. His wife advises him to "curse God and die." In spite of all this Job does no wrong.

Three of Job's friends, Eliphaz, Bildad and Zophar come to sit with their sick companion. After a week of mournful silence, Job speaks and the book begins in earnest. What follows is a series of poetic dialogues in which Job's friends defend the idea, found in Deuteronomy and the related literature of the Hebrew Bible, that God rewards the righteous and punishes the wicked. Job must have done some wrong, they say. Job, in reply, defends his innocence and cries out to understand his suffering.

After Eliphaz, Bildad and Zophar have had their say, a fourth companion, a young man named Elihu speaks. Since Elihu is not mentioned before this point in the story, nor is he mentioned again after his speech, scholars think that his part was inserted by a later hand. Elihu scolds both Job and his companions and defends God in words that foreshadow what comes next.

After Elihu's speech, the Lord speaks to Job out of a whirlwind. God never answers the question of why Job has suffered. Rather, the speech is a statement of the creator God's sovereignty. Some readers find this satisfying. Other readers think that God dodges the question.

The last section of the book is an epilogue, again in prose. God restores Job's health and double his fortune. Eliphaz, Bildad and Zophar are put in their place. Job lives a long and righteous life.

I love the book of Job with its penetrating questions, its soaring poetry and its grand theophany. When I finished reading it again last week, I found myself wondering why such a wonderful theological book of the Bible is so little used by Christians.

I will take that up in my next post.


The picture of Job and his friends was painted by Guy Rowe. I found it here.
Posted by Brant Clements at 6:48 PM No comments:

Jon Pahl, Professor of the History of Christianity at the Lutheran Theological Seminary in Philedelphia , pulls no punches in his criticism of Lutheran CORE. In an article for the Journal of Lutheran Ethics, he writes:


Lutheran CORE claims to represent Lutheran orthodoxy, but...in fact abandons historic Lutheranism at crucial turns in favor of an American civil religion. This accretion of an American imprint on CORE's version of Lutheranism mirrors...how CORE leaders have repeatedly accused faithful ELCA leaders of having themselves sold out to "America." Even more, the leaders of Lutheran CORE, because they assert a self-righteous American moralism about sex and marriage as a litmus test of ecclesiastical purity, confuse law and gospel, and imperil the clear truth of salvation by grace through faith that is the actual core of historical and confessional Lutheran teaching. When teaching about sex replaces teaching about salvation as a defining mark of the church, something has clearly gone severely awry.

The full article (about 10 pages in length, not counting footnotes) can, and should, be read here.
Posted by Brant Clements at 6:59 PM 9 comments: