A YEAR OF BLOGGING BIBLICALLY

This year I want to invite you to join me in reading the Bible.

Here’s the idea: We’ll follow the Blue Letter Bible canonical one year reading plan. This plan divides the Bible into 365 portions. Each portion should take about 10 or 15 minutes to read.

For the purposes of this blog, I’m defining a year as 365 days, but not necessarily consecutive days. I want to be able to take a day or two off each week. Technically that means that this year of blogging biblically will take more than a year.

I’m also defining Bible as the 66 books of the Protestant canon. This is the canon of my denomination. These books are considered Scripture by all Christians. I know that many Christians have a larger canon. I have read, studied, and appreciated the deuterocanonical books. By omitting those books from my year of blogging biblically, I don’t intend to exclude anyone. Neither do I mean to insult anyone else’s canon.

Each day, I will try to offer some remarks on the assigned reading. Your comments will also be welcome. You do not have to agree with me, or with anyone else. I only ask that you be concise and polite. Seriously, try not to write comments that are longer than my posts.

Regardless of your religious tradition, or lack thereof, you are welcome to join me in this venture.

I want us to take an honest look at the Bible, to see what it actually says, to recognize the good and bad in it, to enter into conversation with the Scriptures.

Come with me, won’t you? We’ll start tomorrow with Genesis 1–3. 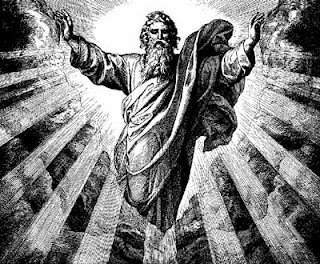 I have a friend who teaches New Testament studies at the college level. He is intensely smart, intellectually rigorous, and steeped in knowledge of the Bible. Where God is concerned, my friend is pretty agnostic. I can’t share his position but, in his case at least, I can respect it.


He once told me that he wanted to begin a speech to the student body saying, “I don’t believe in the God of the Bible. There isn’t one.” He was being deliberately provocative. That’s one of the reasons I like him. He didn’t give that speech. That is another reason I like him.


So what did my friend mean by saying “I don’t believe in the God of the Bible. There isn’t one?” Just this: the various books of the Bible present different portraits of the God of Israel. The anthropomorphic God who walks in the garden of Eden in the cool of the evening (Genesis 3:8) is quite unlike the cosmic God of Isaiah’s vision, the hem of whose robe filled the Jerusalem temple (Isaiah 6:1). Is the God who commands Saul to annihilate all of the Amelekite men, women, children, and even their animals, (1 Samuel 15:2–3) the same God who is described simply as “love” in 1 John 4:16?
In brief, the Bible does not present a single, consistent depiction of God. The various writers of Scripture had different outlooks, different experiences of God, different theologies. To minimize or even ignore this simple fact does the biblical writers, the Bible, and even God a real disservice.

Don't get me wrong. I'm as monotheistic as the next guy--well, the next Trinitarian guy, anyway. I just recognize that the Bible's various writers didn't always see the one God of Israel quite the same way.
Posted by Brant Clements at 12:00 PM No comments: 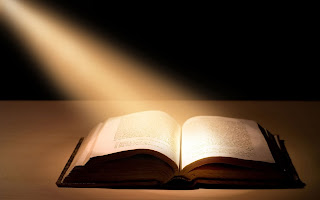 A parishioner called me one day. “I hope I’m not disturbing you,” she said.
I answered, “Not at all. I was just sitting here reading the Bible.”
“Ah,” she said. “The good book,”
“Well, yeah,” I replied. “Parts of it.”

Parts of the Bible are good. Parts are uplifting, inspiring, enlightening. But other parts can be dark and disturbing.
I own a copy of a book titled The Positive Bible, compiled by Kenneth Winston Caine. It has a lengthy subtitle, From Genesis to Revelation: Scripture that Inspires, Nurtures and Heals. It is a collection of Bible verses that, according to Caine, are “empowering, uplifting, helpful, hopeful, inspiring, and faith-building.” And what could be wrong with that?
Nothing, except that it misrepresents the actual Bible in some significant ways. For one, it ignores the negative parts of the Bible.
For another, it treats the Bible as a source of pronouncements that have no context. Let me show you what I mean.  Caine’s book includes Job 8:20–21 (quoted from the “King James Version Modernized”) as one of the Bible’s positive teachings:

God will not cast away a blameless man
neither will he help the evildoers:
He will fill your mouth with laughing
and your lips with rejoicing.

The problem is that these words, in context, are spoken by Bildad the Shuhite, one of Job’s three comforters, of whom God himself says “You have not spoken of me what is right.”(Job 42:7 NRSV). In fact the very premise of the Book of Job is that God has “cast away a blameless man.”

To be fair to Kenneth Winston Caine, he is not the only one who uses the Bible as a verse mine.. All too often I hear believers assert “The Bible says” and then spout some words of Scripture that have been wrenched from any meaningful context, in order to “prove” a point.


All Christians, and particularly Protestants, hold that the Bible is, in some way, authoritative. What I’m proposing is that we should, then, read the Bible in its entirety, both its positive and negative parts. And further, we should not treat the Bible as a collection of verses, but should always pay attention to context so as to understand what the Bible’s writers are actually saying. 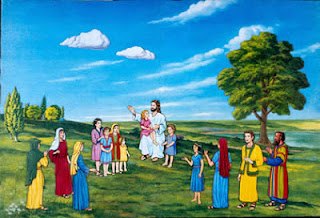 Our Sunday School teacher sat on a folding chair, her ankles demurely crossed, an open book perched delicately on her knees. Beside her chair, an easel supported a sheet of plywood that had been covered with fuzzy cloth. She read us Bible stories that were suitably edited for our young age and, as she read, she placed paper cut-outs of Bible characters on the flannelgraph. They adhered almost magically.

Sometimes she would let us, her students, put the paper dolls, oh so carefully, on the flannel board.

There little David, armed only with a slingshot and great faith, faced off against the giant Goliath. There Jesus walked on water as casually as we might stroll down a sidewalk, but when impetuous Peter climbed out of the boat he fell into the sea with a mighty splash and had to be rescued. There Lot and his family fled the destruction of wicked Sodom but his disobedient wife glanced back and was turned into a pillar of salt.

My Sunday School teacher told me stories full of wonder, adventure, and  mystery. I am thankful. She helped to start me on a path of faith. She contributed to my life-long love of the Scriptures.

The Apostle Paul wrote: When I was a child, I spoke like a child, I thought like a child, I reasoned like a child; when I became an adult, I put an end to childish ways. (1 Corinthians 13:11 NRSV)
I left Sunday School long ago. I realize now that the Bible stories I heard back then were sanitized. They were simplified to teach unambiguous moral truths. They were purged of sex and violence inappropriate for young ears. I may have heard about the destruction of Sodom, but the sin (attempted rape) for which that city was punished went unspecified. Nor was I told the sequel: a sordid tale of drunkenness and incest (Genesis 19:30–38). These things had to wait until I was grown and had put an end to childish ways.

I know now that there are no flannelgraph saints.* The Bible’s patriarchs and apostles, prophets and disciples, are three dimensional. They are fallible. They are sinners. They live the full range of human experience. They feel the full gamut of human emotion. Their stories are not simple, sanitary tales with clear moral messages.

The Bible is messier, more adult, and more wonderful than that.

*Okay, I have to admit that there are a couple of characters in the Bible who might qualify as two-dimensional, flannelgraph saints. I’m thinking specifically of the Patriarch Joseph, he of the rainbow-colored coat. The guy seems a bit too good to be true. I sympathize with his brothers who were so annoyed by him, though, of course, I cannot endorse their selling him into slavery.


Daniel, too, is something of a Johnny One-Note, but since he is presented as a model of faithfulness for an oppressed people, it is probably appropriate.


Posted by Brant Clements at 2:01 PM No comments: 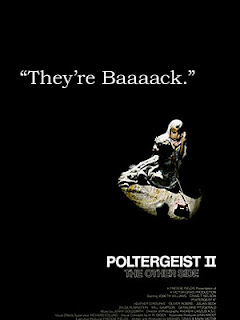 My long hiatus from this blog is at an end. Watch for new posts over the next few days and join me beginning March 1 for a Year of Blogging Biblically.

I plan to blog through the Bible in 365 bite sized chunks.

Details to follow.
Posted by Brant Clements at 8:48 PM No comments: