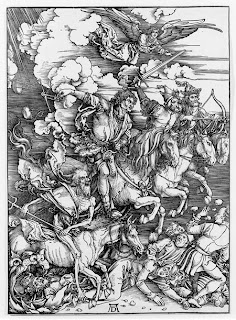 
Illustrating this post is Albrecht Dürer's magnificent woodcut of the Four Horsemen of the Apocalypse. Last month, the Bad Theology blog chronicled some of the misguided end times speculation that centered around Rosh Hashanah. It is my sincere prayer that we will all one day give up this stupid date-setting game.
Posted by Brant Clements at 10:00 PM 1 comment:

Last month I attended the annual Professional Leaders’ Conference (PLC) of the Northern Illinois Synod. Our speaker this year was Rev. Dr. Thomas G. Long, professor of preaching at Candler School of Theology at Emory University in Atlanta. As might be expected from a PhD homiletician, Dr. Long is a knowledgeable and engaging speaker.

During one of his presentations, Dr. Long said that, in today’s culture, we should preach “less like Luke and more like Matthew. You know Luke,” he said, “story, story, story, story. But Matthew is story, teaching, story, ethics....” This was an interesting point in its own right, but it sent my mind chasing down a rabbit trail.

New Testament scholars tell us that Matthew and Luke both used Mark, and a hypothetical document called “Q” as sources for their own works. It’s clear from his use of Mark that Matthew tended to follow the wording of his sources but felt free to rearrange their order. Luke, on the other hand, stuck more closely to the order of his source material, but felt free to rewrite it.

So this set me thinking: “what would it mean to preach like Mark?” A sermon in the style of Mark’s Gospel would be short, dark, somewhat ambiguous and open-ended.

And John? A sermon in the style of John’s Gospel would be a story followed by a long discussion of its spiritual meaning.

During a break at PLC, I mentioned this to Dr. Long. He said, “Yes, and there would be poetry in a sermon in John’s style.” This made me revise my thinking about preaching like Luke. Luke also used poetry and had a rather high-falutin’ prose style.

Then I wondered “what would it be like to preach in the style of Paul’s letters?” Paul’s writings have a good deal of personal testimony. (Paul was his own favorite example). Paul was frequently blunt and occasionally crude. He had harsh words for his opponents, but was warm and personable toward his friends.

I suppose that it might also be possible to preach like the Book of Revelation, but I wouldn’t recommend it. It would only confuse and frighten people.

The painting of Martin Luther preaching was by Lucas Cranach the Elder. I don't think Martin Luther would care too much which which New Testament writer a preacher styled a sermon after, as long as the cross of Christ was proclaimed clearly.
Posted by Brant Clements at 8:10 PM No comments: