I've made my case, off and on, against the doctrine of biblical inerrancy. Today, John Petty blogged Ten Reasons Why Literalism Makes No Sense. Here is his tenth reason:

The preceding nine reasons are equally cogent. Read them all here.
Posted by Brant Clements at 8:35 PM No comments:

The Biggest Dandelion in the World 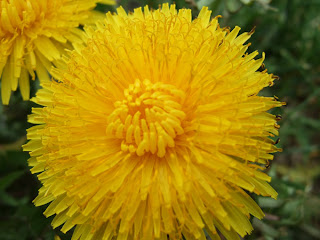 When I started this blog, I deliberately chose not to use it to post my sermons. That has never been its purpose in my mind. Today I had to cancel church because of a vicious storm that knocked out power and phone service and toppled a tree across a road that I have to travel to get from home to church. What follows is a part of the sermon I would have preached this morning. I post it only because a friend requested that I do so. First the relevant passage of Scripture:

It may have been the largest dandelion in the world. If it wasn’t, you couldn’t prove it by me because it was certainly the biggest dandelion that I’ve ever seen. And it was growing in my backyard right next to the air conditioner.
It was massive. The leaves were about 2 feet long and 8 or maybe 10 inches across at the widest point.
We have one of those two-pronged weed pullers on about a 4 foot handle. It’s good for uprooting regular dandelions without bending over. We tried it on the giant mutant dandelion and the tool began to bend!
So I got out the garden spade and started to dig it out. I got about 6 inches down before I broke the root. I’m not kidding when I say that it looked like a tree root. It was almost an inch in diameter. I have no idea how deep it actually went.
If I told you that I broke the shovel, well, then I’d be exaggerating. Or, if I said that there were birds nesting in this dandelion, then I’d be exaggerating too. But it is no exaggeration to say that it was the biggest dandelion I’ve ever seen, maybe the biggest in the world.
So, how would you feel about it if I told you that the Kingdom of God is like that giant dandelion? What if I said that where God holds dominion, it is like the biggest dandelion in the world?
I suppose it might depend on how you feel about dandelions. Do you think they’re pretty? Do you like dandelion green salads? (You could have fed a family of five on this one). Or do you like dandelion wine?
Or, do you, like most of us, think that dandelions are noxious weeds? That they need to be rooted out or they will take over our lawns?
* * *
Jesus said that the Kingdom of God is like a mustard seed and, yes, Jesus was exaggerating when he said that it is the smallest of all the seeds. He was also exaggerating when he said that it grew into a tree and birds could nest in its branches. Mustard seeds are small and they grow into a substantial shrub, but still, Jesus was exaggerating.
And if his point was that the God’s dominion starts small and grows big then he made his point. But using mustard as a parable for the Kingdom is something like comparing God’s reign and rule to a giant dandelion.
On the one hand, mustard is useful. It can be used to season food. It can be used medicinally. (You’ve heard of mustard plaster, right?)  But on the other hand, mustard grows like a weed in Palestine. It has to be rooted out of wheat fields and barley fields. It has to be pulled up or it will take over your garden.
So when he compared the Kingdom to mustard, well, Jesus was saying that God’s dominion is like a lowly, humble, even noxious plant...which God makes good of. Perhaps Jesus was even saying that the Kingdom of God is made up of lowly, humble, and even noxious people...whom God makes good of.
* * *
And Jesus told another parable. Jesus said that the Kingdom of God is like yeast. A woman added a lump of it to three measures of flour. By one estimate that’s enough flour to make 100 loaves of bread.
Now I don’t know about you, but I think of yeast as a good thing. Last night I made a pizza on the grill and the crust was all crispy and bubbly and good because I put a packet of yeast in three cups of flour.
But if Jesus meant that yeast is a good thing in this parable, it is the only place in Scripture that I know of where yeast is considered good. Usually it’s a negative thing.
Campus pastor Scott Alan reinterprets the parable of the yeast this way:

He told them another parable: “The kingdom of heaven is like a bad apple that a woman took and mixed in with three bushels of apples until all of them were spoiled.”

In other words, all of these parables are telling us that God’s Kingdom comes into this world in surprising, unexpected, humble, maybe even noxious ways. The Kingdom does not come in glory. The King does not come riding on a white charger or sitting on a golden throne.
The King comes humble and riding on a donkey. The King comes nailed to a cross, dying between two thieves.
The Kingdom comes by means of a cross. And just like yeast leavening 3 measures of flour, or mustard growing wild in the fields, or a giant dandelion taking over my backyard...the cross changes everything.
The Scripture quotation is from the New Revised Standard Version. The image of the dandelion came from this website.  Some of the thinking that went into this sermon was inspired by, or perhaps stolen from Mark G. Vitalis Hoffman’s commentary at the always excellent Working Preacher website.
Posted by Brant Clements at 7:17 PM No comments:

A Confession, a Thank You Note...

AND A STATEMENT OF FAITH 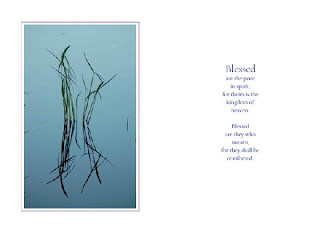 Last June, voting members at the Northern Illinois Synod’s Annual Assembly were given a gift, a book titled The Word of Jesus. It is a beautifully made little hardcover book with a dust jacket and a sewn-in ribbon marker. The pages are heavy slick stock. The book contains 60 quotations of Jesus’ words from the Gospels illustrated with 33 lovely photographs. It was compiled by Douglas Koons and Gideon Devanasen. I had the pleasure of meeting Pastor Devanasen once when he visited the United States. At that time he was bishop of the Arcot Lutheran Church in India. The Arcot Lutheran Church has a companion synod relationship with the Northern Illinois Synod.
A charming and intelligent man, Bishop Devaesan had a stroke in 2008 and had to resign  his position with the church. The book was, apparently, a project that he and Douglas Koons undertook while the Bishop was making recovery.
Which brings me to my confession: When I picked up my copy of The Word of Jesus, I thought, “This is an extravagant gift” and it crossed my mind that the Arcot Lutheran should be receiving gifts from us, not giving them.
As soon as I thought it, I realized I was wrong. I like to think I’m an enlightened guy, but my own thoughts convicted me of a certain bigotry, an unwarranted assumption of cultural superiority.
This stuff runs deep in us.
So to my note of thanks: I used The Word of Jesus as bedtime devotional reading for about two weeks, contemplating the quotations, getting lost in the photographs and praying that Jesus’ words might take flesh in my own life. I am grateful for this generous gift from the Arcot Lutheran Church. I intend to write thank you notes both to our companion synod and to Douglas Koons.
I won’t mention, but I am no less grateful for, the gift of having my eyes opened to the deep-seated flaw in my character, my assumption of cultural superiority.
And the statement of faith: At the end of the book there are two sections of “Commentary,” one by Douglas Koons and the other by Gideon Davenasen. This quote from Koons’s commentary struck me as particularly trenchant and insightful:

“Faith is a surrendering of ourselves unto God as God has surrendered unto us in Jesus Christ. It is not about sets of belief systems created by various Christian communitines that must be seen as correct ways to think of Jesus. For there is no idea or creed, doctrine or theology that can adequately express the grace that is faith. When we are scattered, disbelieving and distracted by all of life’s intensity, God is present in our lives. As there is light even in the shadows of the earth, God’s grace is present in our doubt. An early follower of Jesus was a man named Paul. In one of his letters to the disciples at Corinth he writes, ‘For now we see though a glass darkly, but then face to face. Now I know in part, but t hen shall I know even as I also am known.”

The illustration accompanying this post is a page from The Word of Jesus. The image was found at the publisher's website, here.
Posted by Brant Clements at 9:15 PM No comments: