THE YEAR OF BLOGGING BIBLICALLY: DAY 18

Exodus begins where Genesis ended. The twelve sons of Jacob live, and die, in Egypt. Their descendents increase in numbers. A new Pharaoh arises who sees the Israelites as a potential threat. He takes strict measures against them. First the Israelites are made slaves and put to hard labor. When they continue to flourish in numbers, Pharaoh orders the Hebrew midwives to put their male babies to death.

The  midwives, Shiphrah and Puah, are mentioned by name only once in all the Bible. There is some question as to whether they are Egyptian or Hebrew. It hardly seems important. Whatever their ethnicity, these women, by an act of civil disobedience and a bold lie, ensure their status as heroines in the biblical narrative.

Do we owe obedience to unjust rulers? Is it always wrong to lie? In this story it would seem that the answers are "no" and "no." Is this a biblical example of moral relativism?

In the light of the midwives failure to cooperate, Pharaoh issues a general order that Hebrew baby boys are to be drowned in the Nile.

In chapter 2 of Exodus, we meet an unnamed couple from the tribe of Levi. (The Levites will become Israel's priestly tribe). They have a baby boy. The mother, understandably reluctant to put her child to death, puts him in a reed basket and sets him to floating down the Nile.

Is this an act of desperation or faith? I think often the line between the two is thin.

The baby's older sister watches to see what will happen. She is not named at this point in the story, but from later events we can assume that this is Miriam.

Miriam sees her little brother rescued by the Pharaoh's own daughter. She offers to find a wet nurse for the baby, and the little one is put back into the arms of his mother. What's more, the mother gets paid to care for her own child.

When the boy is a little older, he is given to Pharaoh's daughter who raises him as her own (we might surmise royal) son. She names him Moses.

The text isn't clear as to whether Moses knows his Israelite heritage. It seems that he does. When  he is a grown man, he kills an Egyptian who was beating an Israelite.

Yes, Moses, Israel's greatest hero, is guilty of manslaughter if not murder. He tries to cover up the killing but, when it is clear that he was seen, Moses takes it on the lam. He runs off to Midian.

Remember the trope about the hero who goes searching for a wife and meets a woman at a well? One of them, as it goes, draws water and a marriage contract is made. Variations on this story tell us something about the hero.

Moses isn't looking for a wife. He's a fugitive. He does, however, meet some women at a well. He rescues them from bullies  and winds up marrying one of them, a woman named Zipporah. In the future we will find Moses once again a fugitive and a rescuer.

Zipporah has a son who Moses names Gershom because, Moses says, "I am a stranger (Ger in Hebrew) in a strange land." Besides giving Robert Heinlein a great title for a novel, this is another description of Moses life ahead.

As chapter 2 ends we can ask once more if God is forgetful, because he now rememebers the covenant he made with Abraham, Isaac, and Jacob. 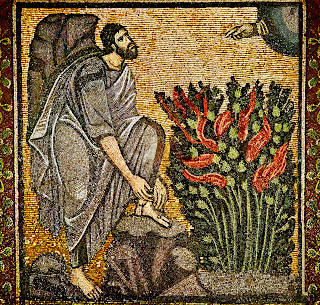 Chapter 3 tells the famous story of how God called Moses from a burning bush. That is, the bush was burning but the fire did not consume it. When Moses hears God call he answers, as you might expect, "Hineni. Here I am."

As best I recall, this business of taking off ones footwear while standing on holy ground doesn't occur anywhere else in the Bible.

Throughout Genesis God was called by many names and titles, and he will be again, but here in Genesis 3 God reveals his true name to Moses. He is YHWH* which means something like "I am who I am" or "I will be who I will be." It is a radical statement of God's sovereignty.

God commissions Moses to rescue the Israelites from their slavery in Egypt, promising that they will not only be set free, but they will plunder Egypt on their way out.

*I follow an old Jewish tradition of omitting the vowels from God's name. No one can be exactly sure how the name was meant to be pronounced, though we can be quite certain it was not Jehovah. In reading the Scriptures aloud, Jewish custom substituted the title Adonai (usually rendered Lord,written in small capital letters, in English Bibles) for the name YHWH.