God Has A Grammatical Gender...

NOT A PHYSICAL SEX 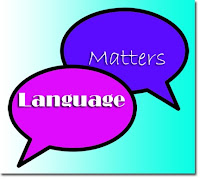 It is awkward, and nearly impossible to avoid the use of third person singular personal pronouns when speaking about a person, even when that person is God.

I was born and brought up in a time when humankind was collectively refered to as "man" as a matter of routine. The assumption underlying such a use is that maleness is the normal condition of humanity. The corollary to that assumption is that femaleness is a lesser or defective human state. Think about that. It's nuts.

In those distant days, God was refered to exclusively in masculine terms. Old habits die hard. I still sometimes call God "he." When I get called on it, my almost reflexive response is the title of this post: "God has a grammatical gender, not a phyiscal sex." That's pure banana oil, of course, but it usually buys me enough time to finish my thought without getting sidetracked by a discussion of gender language.

I am writing this post on the second day of a three day symposium in Chicago called "Language Matters." Hosted by the National Council of Churches, the symposium deals with inclusive (or "expansive") language concerns. When it is all over, I am sure that there will be head-shaking, finger-wagging and tongue-clucking from some quarters. But as for me, I applaud the intent of the symposium, pray for its success, and look forward to hearing about its proceedings.

Thirty-five or forty years ago, this clever, though amateurish bit of animation introduced me to inclusive language concerns. Take two minutes to enjoy a blast from the past.

Posted by Brant Clements at 8:49 PM