This Just In: Obama is NOT a Muslim

AND THE ELCA IS NOT A UNIVERSALIST CHURCH

The news broke yesterday that 18% of Americans believe that President Barak Obama is a Muslim. Read about it here. Why do people believe this patent falsehood? It is at least partly because it has been insinuated by fear mongering pundits. The insinuations do not have to be true, they just have to scare people. And why do the pundits traffick in fear? Because it works. It keeps the troops on alert. It gets frightened people off the couch and into the voting booths where they will help elect candidates who will promote the pundits' interests. 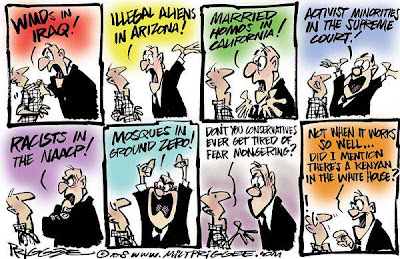 It seems to me that the charge of universalism that is leveled, falsely, against the Evangelical Lutheran Church in America is a scare tactic. Pastors, who should know better, use it to stir up their congregations to leave the ELCA. The sexuality issue by itself may not be enough to motivate some of the laity to vote with their feet. After all, the '09 Churchwide Assembly allowed for a "local option" which means that no congregation will be forced to call a same-sex partnered pastor...or any other pastor for that matter. I know that some bishops have promoted the local option heavily, even offering assistance to congregations that want to append a "no gay clergy" resolution to their constitutions. So, the trumped up charge of heretical universalism is used to scare people who do not bother to check further.

Mnphysicist's theological blog has a nicely written post refuting the charge of universalism in the ELCA. Read it. And if you still think that the ELCA promotes universalism, read it again.

In the meantime, I am left to ponder just what is it about universalism that frightens people? Is it the idea that Barak Obama might get to go to heaven?


I "borrowed" the cartoon from the Progressive Involvement blog, here.
Posted by Brant Clements at 3:14 PM