AND THAT'S A GOOD THING 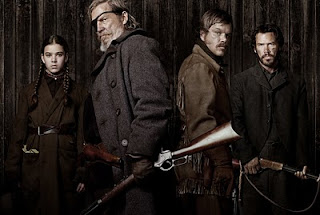 One of my favorite movies of recent years was the Coen Brothers’ take on True Grit. If you have seen the film, you know that the characters, all of them, have an unusual way of speaking. They don’t use contractions. Instead of “I’m” they say “I am.” Instead of “won’t” they say “will not.” This quirk of dialogue was taken over directly from the Coen Brothers’ source material: the novel True Grit by Charles Portis. It is almost as if Portis’ typewriter was missing the apostrophe key.

This curious speech pattern gives the Coen Brothers’ movie a strange quality, an alien gravity. It is almost biblical and that is appropriate in a story replete with religious themes and images.

I heard somewhere (I wish I could find a reference) that people living in Arkansas in the 1870s, the movie’s setting, actually spoke this way. They learned to read from the King James Bible and that version of Scripture stamped its mark on the patterns and cadences of their speech.

I was taught long ago to avoid the use of contractions in formal writing. (Is blogging formal?) Everyday speech is another matter. I had a friend in high school who did not use contracted forms in speaking. It was, frankly, a little weird.

What I’m saying is this: English spoken today without contractions sounds biblical and odd. But that’s not right. The Bible was not written to sound odd. It was written in the everyday language of its first readers. Granted, some of the Scriptures are more formal than others, some more poetic, some more dialogic, but all of the Scriptures were intended by their writers to be read aloud and, I think, to sound right.

In ancient times all reading, even private reading, was done aloud.

The recently published Common English Bible is replete with contractions. A page from the CEB website notes:

The Common English Bible is the only translation to extensively use contractions where the text warrants an engaging conversational style (not used in divine or poetic discourse).

A sample verse from my daily Bible reading:

Although you’ve never seen him, you love him. Even though you don’t see him now, you trust him and so rejoice with a glorious joy that is too much for words. (1 Peter 1:8 CEB)

As a participant in the Common English Bible “Thank You-Come Again-I Promise” Blog Tour, I can give away a Bible a week for three months. First person to reply to this post gets a free copy of the CEB. Just say “I want it” and, after I reply, send me your address. I’ll forward your information to B and B Media, and they will send you your Bible.

The picture of Hailee Steinfeld, Jeff Bridges, Matt Damon and Josh Brolin in True Grit was borrowed from this website.

Posted by Brant Clements at 8:17 PM