READING THE NEW TESTAMENT INTO THE OLD 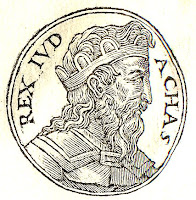 Many of the details of the story are lost to history, but this much seems clear. Around the year 732 BCE, King Pekah of Israel and King Rezin of Aram formed an alliance and marched against King Ahaz of Judah. In response to this threat, Ahaz, a descendant of King David, appealed for help to King Tiglath-Pilaser of Assyria.

The prophet Isaiah, a staunch supporter of the Davidic dynasty, was absolutely opposed to Ahaz’s plan to seek foreign support. The prophet confronted the King and declared that his enemies were destined to fail.

The King piously demurred, “I will not test the Lord.” Many have questioned the sincerity of Ahaz’s piety. He never showed much attachment to the God of Israel.

“Then the Lord will give you a sign, anyway,” Isaiah replied. “An almah is pregnant...”

Almah is a Hebrew word which, according to a footnote in the Jewish Study Bible (p. 798-9) “denotes a young woman of marriageable age, whether married or unmarried, whether a virgin or not.”

There is nothing extraordinary about an almah being pregnant. But, let’s finish Isaiah’s prophesy:

The young woman is pregnant and is about to give birth to a son, and she will name him Immanuel. He will eat butter and honey, and learn to reject evil and choose good. Before the boy learns to reject evil and choose good, the land of the two kings you dread will be abandoned. The LORD will bring upon you, upon your people, and upon your families days unlike any that have come since the day Ephraim broke away from Judah—the king of Assyria. (Isaiah 7:14b-17, CEB)


Exactly what in this constitutes the sign is not entirely clear. It may be the pregnancy, the birth, the name or the child’s diet. What is clear is that, in a few years time, the threat posed by Kings Pekah and Rezin will be gone, but Ahaz will face a greater threat, the Lord’s anger for his alliance with Assyria.

Translation is an art, not a science. If translation were a science, babelfish would work better. The fact is, a word in one language may not have an exact equivalent in another language.

At Isaiah 7:14, the Septuagint rendered the Hebrew word almah with the Greek parthenos. In the New Testament era parthenos definitely meant “virgin.” The Gospel of Matthew quotes the Septuagint version of this verse in reference to the birth of Jesus:

This is how the birth of Jesus Christ took place. When Mary his mother was engaged to Joseph, before they were married, she became pregnant by the Holy Spirit. Joseph her husband was a righteous man. Because he didn’t want to humiliate her, he decided to call off their engagement quietly. As he was thinking about this, an angel from the Lord appeared to him in a dream and said, “ Joseph son of David, don’t be afraid to take Mary as your wife, because the child she carries was conceived by the Holy Spirit. She will give birth to a son, and you will call him Jesus, because he will save his people from their sins. ” Now all of this took place so that what the Lord had spoken through the prophet would be fulfilled:
Look! A virgin will become pregnant and give birth to a son,
And they will call him, Emmanuel.
( Emmanuel means “ God with us. ” )
(Matthew 1:18-23, CEB). 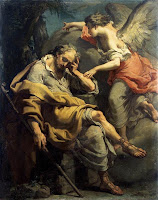 Some English versions of the Bible (e.g. the English Standard Version and the Holman Christian Standard Bible) translate almah at Isaiah 7:14 as “virgin.” This makes the Hebrew Scripture accord with Matthew’s use of it. This seems to me an illegitimate translation strategy. It removes Isaiah’s prophecy from its historical context and makes it seem as if Isaiah’s oracle was only a prediction of Jesus’ miraculous birth. It is a dishonesty in the service of doctrine.

I prefer the strategy adopted by the CEB and the New Revised Standard Version (among others), translating almah as “young woman” at Isaiah 7:14 and allowing Matthew’s quote from the Septuagint to speak for itself. Matthew’s use of Old Testament prophecy has more to do with typology than prediction anyway.

Some will argue that translating almah as “young woman” undermines the doctrine of the virgin birth. It doesn’t. The Gospels of Matthew and Luke both state clearly that Mary, the mother of Jesus, was a virgin. What gets undermined is a false notion of what constitutes prophesy and fulfillment in the Bible.

The picture of King Ahaz and Gandolfi's Painting of Joseph's Dream were both found at Wiki. As a participant in the CEB Blog Tour, I was given a copy of the Common English Bible, and I am able to give a copy of the CEB away each week. Watch for your opportunity to win a free paperback edition of the CEB next week.

Posted by Brant Clements at 9:31 PM