PART ONE OF A SERIES (PLUS A BIBLE GIVEAWAY!) 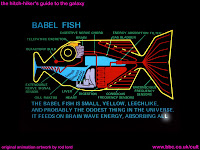 If you’ve never played with the internet translation engine called babelfish, it is kind of fun and occasionally useful. You plug in a block of text in the source language, choose the language filter you desire, and it gives you a crude translation in your chosen target language. For an example, here’s Psalm 23:4 from the Common English Bible:

Even when I walk
through the darkest valley,
I fear no danger
because you are with me.
Your rod and your staff—
they protect me.

And here is how babelfish translated that verse into French:

I don’t happen to speak French. Nor do I think I’ll ever try. (I was traumatized by a Parisian waiter once). Still, I think I see a little problem in babelfish’s result. Let’s translate it back into English and see what happens:

Even when I walk by the most sunk valley, I do not fear any danger because you are with me. Your stem and your — of personnel they protect me.

Translation is as much an art as a science. If translation were a science, babelfish would work better. Maybe one day, with advances in Artificial Intelligence, a translation engine will give better results.

One difficulty in translation, whether done by a computer or a human being, is that words have a range of meaning. The English noun staff can mean a shepherd’s crook or it can mean personnel. In this case, babelfish chose the wrong meaning.

Consider the verb “to spike.” (Never mind the noun)! You can spike a fever. You can spike a volleyball. You can spike the punchbowl at Senior Prom. Arguably these three meanings are related, but they are far from the same thing. Now, imagine the difficulties of translating the wordplay in the following English sentence into another language--any other language.

After she drank the spiked punch, she began to spike a fever and could not spike the volleyball.

Let’s see how babelfish does. In French:

And back into English:

After she drank the enriched punch, she began a fever and could not spike volleyball.

Not bad. The meaning is mostly preserved, but the repeated use of “spike” is lost.

There are perhaps as many as 500 translations of the Bible into English. This is the first of a series of blogposts dealing with translation, and what distinguishes all those Bible versions one from another.

The Common English Bible is sponsoring a second Blog Tour beginning this Wednesday, February 22. As a participant, I’ll be able to give away a free paperback copy of the CEB each week for the duration of the tour. If you would like to win this week’s free copy, cut and paste your favorite Bible verse (any English version) into the babelfish engine. Translate it into the language of your choice and then back into English. Post the results in the comments to this thread, and the one that amuses me most gets the Bible. This contest ends at 11:59 p.m. Central Time, Saturday February 25. You'll need to check back next week to see if you've won. Decision of the judge (me) is final and completely arbitrary, but play along. It’ll be fun!


Babelfish takes its name from a creature described in Douglas Adams' The Hitchhiker's Guide to the Galaxy. The illustration of the babel fish was taken from this website. A good description of the fish, and how it proves, or disproves the existence of God can be found here.

Posted by Brant Clements at 8:33 PM