THE YEAR OF BLOGGING BIBLICALLY: DAY 22 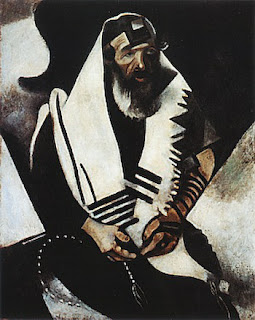 In the twelfth chapter of Exodus the Lord killed all of the firstborn males of the Egyptians, both human and animal. After this display of God's power 600,000 Israelite men, not counting women and children, left Egypt hastily. They did, however, take time to ask their Egyptian neighbors for gold and riches, thereby plundering Egypt.

Chapter 13 begins with an instruction that every firstborn among the Israelites is to be consecrated to YHWH.

There is an interruption to add some further instructions about the celebration of the Passover. That celebration is to be a perpetual reminder, a "sign on your hand and a reminder on your forehead," of what God did for his chosen people. That business of the hand and forehead will recur in Deuteronomy 6 and 11 where God's words are to be bound to "your hand and your forehead." This is the source of the practice among observant Jews of binding tefillin (a.k.a. phylacteries), leather boxes containing miniature scrolls of scripture to their foreheads and arms. In the Christian Bible, there is also a reference to marks on the hand and forehead in the Book of Revelation. There a monstrous beast (representing imperial Rome) requires people to bear its mark on their hand or forehead if they wish to do business--a clear mockery of God's mark upon his people. But we have a long time to go before we get there.

The we read of how the Lord, leading Israel by a pillar of fire and cloud, which recall the symbols of the Abrahamic covenant back in Genesis 15. The Israelites are traveling as an army, prepared to fight. God, however leads them away from the Philistines so that they do not need to face battle. God worries that they will all scurry back to Egypt if they have to fight. 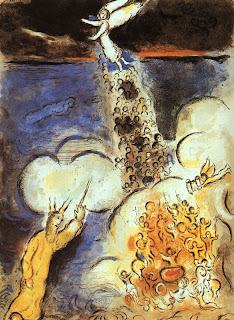 Chapter 14 tells how the Lord hardens Pharaoh's heart yet again. Pharaoh pursues his escaping slaves to the edge of the Red Sea. (Bible geography geeks will point out here that the Hebrew Bible refers not to the Red Sea but a sea of reeds. Whatevs.) YHWH fights for the Israelites. "Israel's army" (v. 19) doesn't have to lift a sword.

Every now and then I come across a naturalistic or scientifical-ish explanation for biblical episodes such as the parting of the sea:


The water was shallow; the Israelites waded across; the Egyptians couldn't follow in their chariots.


There was a unique alignment of planets that caused the sea to split.

That sort of thing.

While looking for an illustration for my post about the plagues in Exodus 7-12, I came across a website claiming that the plagues were caused by an earthquake and a volcanic eruption. I didn't bookmark that site and I'm not going to look for it again. That should give you an idea of how I feel about naturalistic and scientifical-ish explanations of biblical events. They prove nothing and actually undermine the intent of the narrative.

These stories of miracles are intended to proclaim that God intervened on behalf of his people. How such things happened, even if they happened, are of no interest to me. I am much more interested in the meaning of the text than in some nonsensical defense of its facticity.

In chapter 15 the people celebrate God's victory on their behalf with a wonderful song. This is a good example of Hebrew poetry, full of parallelism. It is not a little hyperbolic. The song tells how the nations of Philistia, Edom, Moab, and Canaan will be terrified of God's people. How soon the Israelites will forget this!

The song ends with a reference to "the mountain of" YHWH's "inheritance, the place, Lord, you made for your dwelling." This looks far ahead in the story, to the construction of the temple on Mt. Zion in 1 Kings.

Miriam, who is called a "prophet," leads the women in a victory song that is either a doublet or a refrain of the previous song.

The chapter ends with an event at a place called Marah (which means "bitter"). The water is bad, but, at the Lord's instruction, Moses tosses a piece of wood into the water and makes it drinkable. This is the first of a series of hardships that serve to test God's people.
The Lord tells them to keeps his commands and he will keep them healthy.


It is only by coincidence that I am reading these stories of the Exodus so close to the annual celebration of Passover. It provides me an excellent opportunity, however, to wish all my Jewish friends a Glad Pesach!