THE YEAR OF BLOGGING BIBLICALLY: DAY 14 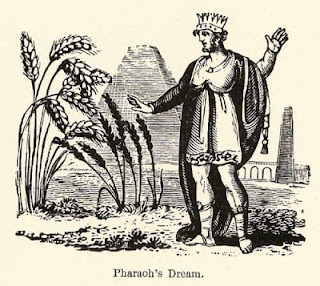 In Genesis 41 we read of the third cycle of two dreams in Joseph's story. This time the dreams belong to the Pharaoh, the king of Egypt. Troubled by nightmares, Pharaoh asks his magicians, seers, and sages to interpret them. When they are unable, Pharaoh's cup-bearer remembers the prisoner who, two long years earlier, had correctly interpreted his dreams. Pharaoh sends for Joseph in prison.

Before he is presented to the king, Joseph stops to shave, and we must imagine that he shaves his entire head in the Egyptian style

According to Joseph, Pharaoh's dreams portend 7 years of plenty followed by 7 years of famine. Impressed by this interpretation, the king elevates Joseph to the position of number 2 in all of Egypt. His authority is subject only to Pharaoh himself. Joseph is given charge of laying up a supply of grain during the 7 prosperous years to provide for coming famine.

Because he is faithful and favored by God, it seems that Joseph cannot help but get ahead. One day he is a slave in prison, the next day he is wealthy and powerful beyond imagining. On television today we have an array of preachers who promise their virtual flocks that God will reward their faithfulness with prosperity. Do you think this is true? Does it fly in the face of Jesus' preaching and experience? (As a Lutheran I'm pretty well committed to the theology of the cross, as opposed to the theology of glory.)

Joseph marries an Egyptian woman and has two son, Manasseh and Ephraim. These two will become the ancestors of two tribes of the nation Israel. If you have been counting, there are now 13 tribes of Israel: 11 of Jacob's own sons and two of Joseph's. We speak of the 12 tribes, however, because the tribe of Levi will not own land in Canaan.

Chapter 42 begins back in Canaan where the predicted famine has struck. I love Jacob's question to his sons. "Why are you sitting there looking at each other?" sounds like something my father would say.

Ten of Jacob's sons go down to Egypt to buy grain. Not coincidentally, these are the ten who sold Joseph into slavery. Benjamin, Joseph's full brother, and the youngest of Jacob's offspring, stays behind with his father.

When Joseph meets his brothers, they do not recognize him (probably because of that Egyptian shaving thing), or realize that he speaks their own language. He treats them harshly. Even straight-arrow Joseph can't help but mess with these guys, but when he overhears them talking ruefully about how they treated him, he weeps. Joseph is actually a pretty weepy guy. This is only the first time we hear about him shedding tears.

Joseph accuses his brothers of spying. He takes one of his brothers as a hostage, putting Simeon in prison and demanding that the others return with their youngest brother, Benjamin. Joseph sells grain to the rest but puts the money they paid into the sacks with the grain.

There is a prison in the town where I live. I know a few of the guards. One of the unusual features of this prison is that the prisoners are given a key to their cell. They can lock other prisoners, though not the guards, out. When prisoners are transferred in from other facilities, they often balk at taking their key. They think the guards are setting them up.
When the brothers find their money in the grain sacks, they think they are being set up.

When they get back to Canaan and report the situation to Jacob, he is reluctant to send Benjamin to Egypt with them. Who can blame him? He thinks that he has already lost two sons. His statement, "I am the one you have bereaved of children. Joseph is no more. Simeon is no more. Now you would take Benjamin away from me!" is layered with ironies. Jacob doesn't know that the sons before him are in fact responsible for Joseph being gone. Nor does he know that Joseph and Simeon are, in fact, just fine.

This is good storytelling.

Notice, too, that the eldest brother, Reuben, is the one who is ready to take responsibility. This completely in keeping with his character.

Posted by Brant Clements at 2:18 PM