THE YEAR OF BLOGGING BIBLICALLY: DAY 24

Chapter 19 of Exodus finds the Israelites encamped at the base of Mt. Sinai. In the course of this chapter Moses goes up and down the mountain three times, carrying message from God to the people. The people agree to keep God's covenant. In return, God will make them "a kingdom of priests and a holy nation." The people are told to consecrate themselves, wash their clothes, and abstain from sex for three days in preparation for God's theophany on the mountain. They are to keep away from the mountain under penalty of death. God comes with the now familiar symbols of smoke and fire.

At the chapter's end, Moses is at the foot of the mountain. He has been told to bring Aaron up the mountain with him, which he apparently does not do.The narrative is not completely consistent.

God speaks at the beginning of chapter 20, though Moses is not on the mountain. His words are the famous 10 Commandments. There is another version of the 10 Commandments, with some slight variations of wording in Deuteronomy 5. Everyone agrees that there are 10 Commandments, though different traditions divide them differently. The first 3 (or 4) Commandments deal with the Israelites' relation to God. The remainder are about relations to the neighbor. The commandment to keep the Sabbath as a day of rest is related, here, to the Creation account in Genesis 1:1-2:4.

Attentive readers will note that the Commandments are addressed specifically to Israelite males. They begin "I am YHWH your God who brought you out of the land of Egypt...." YHWH is Israel's God. YHWH brought Israel out of Egypt. The fact that the commandments are addressed to males is established in v. 17, "You shall not covet your neighbor's wife...." It says nothing about your neighbors husband. There are other hints that the Commandments were meant for men. for instance, only men could hold property in Israel. 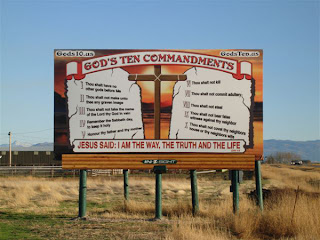 The United States of America, where I live, is a secular, pluralistic society. Citizens of this country are free to practice their religion as they see fit. Or not. By constitution, the U.S. government cannot establish a state religion. This has been interpreted to mean that Church and State are, and will remain, separate.

Every now and again a group of citizens will promote the idea that the 10 Commandments should be posted in our schools, courthouses, or other civic buildings. They are wrong. It would be a clear violation of the separation of Church and State. Posting the 10 Commandments in government buildings would amount to promoting the worship of a single, specific God.

Now, don't get me wrong. I'm in favor of the Commandments. I'm even in favor of having them posted publicly. They belong in churches and synagogues and private homes. They even belong on billboards by the side of the road. They just don't belong in government sanctioned displays.

At Exodus 20:18 ff. the Israelites are afraid of the signs of God's presence: smoke, lightning, thunder, and trumpet blasts. "Let God talk to you," they tell Moses, "and you talk to us." Moses tells them not to be afraid. Verse 20:20 seems curiously self-contradictory.

Moses said to the people, "Do not be afraid; for God has come only to test you and to put the fear of him upon you so that you do not sin."

Then Moses goes into the deep darkness where God is.

God gives Moses more laws for the people, repeating that they should not make and worship idols. Israelite altars should be made of earth or unhewn stones. There should be no steps leading up to the altar. You'll have to read why for yourself. I'm not saying.

Chapter 21 includes rules for the treatments of Hebrew slaves. If a countryman sells himself into your possession, there are limits on how you can treat him. There are different regulations concerning female slaves. Buying a female slave was, it seems, equivalent to marrying her.

Without going into undue detail, there are laws concerning murder and manslaughter, the former being a capital offense. The death penalty is also invoked for kidnapping and cursing one's parents. That last one seems harsh.

Penalties are specified for causing injury to another person. This is the first time we encounter the principle of "an eye for an eye, a tooth for a tooth." It goes on to say "hand for hand, foot for foot, burn for burn, wound for wound, bruise for bruise," though it is rarely quoted that fully.

Verse 22 deserves comment.  Here it is from the New Revised Standard Version:

When people who are fighting injure a pregnant woman so that there is a miscarriage, and yet no further harm follows, the one responsible shall be fined what the woman's husband demands, paying as much as the judges determine.


And again from the New International Version:

If people are fighting and hit a pregnant woman and she gives birth prematurely but there is no serious injury, the offender must be fined whatever the woman’s husband demands and the court allows.


This law is so specific that it almost had to have arisen from a particular case. Was the woman was caused to "miscarry" or "give birth prematurely?" The Hebrew says something like "her child departs from her."  And what does it mean that "no further harm" or "no serious injury" follows? These are matters of interpretation.

I suspect that translators of this verse are motivated largely by ideology. Those who believe that a fetus has the full rights of a human being will translate "give birth prematurely" and assume that neither mother nor child is harmed beyond that. Those who do not accord full human rights to a fetus will translate "miscarry" and assume that it is the mother who is not further harmed.