THE YEAR OF BLOGGING BIBLICALLY: DAY 12

Genesis 35 begins with Jacob's return to Bethel where he establishes an altar for the worship of God. Bethel will be an important site of worship later in the story of the nation of Israel.

Jacob also orders the members of his household to dispose of their "foreign gods." Presumably this includes the idols that Rachel purloined from her father. Why they also get rid of their earrings is a mystery to me. Perhaps earrings had something to do with the worship of other gods.

In verse 8 we learn that Rachel's nurse, Deborah, has died. Though we've never heard of this woman before, her demise provides us with the origin for another place name.

As long as we're naming things, there is a doublet here (from another source?) for Jacob's name being changed to Israel. After Abram and Sarai's names were changed, the text consistently referred to them as Abraham and Sarah. Israel is still sometimes referred to as Jacob even after this point in the story. Later the nation of Israel will sometimes poetically be called "Jacob."

Rachel has one more son but, sadly, dies in childbirth. Jacob's 12th son is named Ben-Oni (Son of My Sorrow) by his dying mother, but renamed Benjamin (Son of the South or Son of My Right Hand) by his father.

The chapter ends with a notice of Isaac's death. As Isaac and Ishmael cooperatively buried their father, Abraham, now Esau and Jacob reunite to bury Isaac.

Chapter 36 is concerned with the genealogy of Esau's descendants. Once again a genealogy marks a turn in the narrative. We are now wrapping up the story of Jacob. Beginning in chapter 37 our attention is focused on Joseph.

Joseph is associated with dreams from the start. We will see his dreams come true as his story progresses. For now, Joseph's dreams annoy his older brothers as, I suppose, does his father's obvious favoritism, represented by the gaudy coat Isaac gives him.

The brothers conspire to kill Joseph. Reuben, his eldest sibling, tries to save his life. Judah, another brother, convinces the rest not to kill Joseph, but to sell him as a slave to a passing caravan of Ishmaelites. Or are they Midianites? These take him to Egypt and sell him to an army officer named Potiphar.

In the meantime, Joseph's brothers take his fancy coat, smear it with goat's blood, and use it to convince Jacob that Joseph has been killed. Jacob is heartbroken.

These are our ancestors in the worship of the Lord. 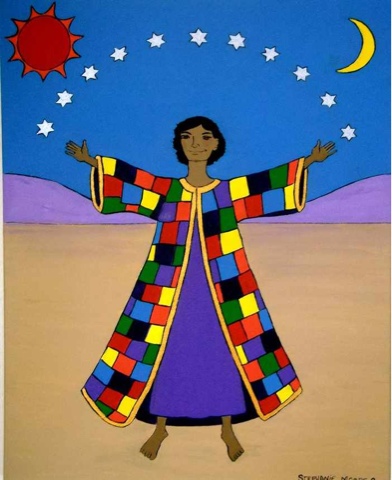 Posted by Brant Clements at 4:15 PM