THE YEAR OF BLOGGING BIBLICALLY: DAY 19

Meanwhile, back at the burning bush...

Once again we have a chapter that begins in the middle of a conversation, another reminder that the chapter and verse divisions in our modern Bibles were not original to the text. Chapter divisions were added later verse numbers later still. They are useful for navigating the Scriptures, but can be misleading. The divisions sometimes come at odd places, such as here at Exodus 4:1. Verse numbering creates the impression that verses are meaningful apart from context.

Chapter 4 starts with Moses' question: What if the Israelites don't believe me? God gives Moses three signs by which he can convince them:

He can turn his staff into a snake.

He can make his hand leprous and clean by placing it inside his cloak.

He turn the water of the Nile into blood by pouring it on the ground.


As miracles go, these are barely magic tricks. At the end of the chapter, however, we learn that they are convincing. The detail of Moses running away from his staff when it becomes a snake makes me chuckle.

Even armed with these signs, Moses is reluctant to do as God asks. He complains that he is "slow of speech." God, the creator of mouths, promises to give Moses words. Finally Moses makes a bare request: Send someone else. God, understandably, gets angry. But God promises to send Moses' brother Aaron along as Moses' mouthpiece. In fact, Aaron is on his way.

This raises the question: Where did Moses get a brother? How did Aaron escape being drowned in the Nile?

I love the way that Moses argues with God. The relationship of these two is not static or one-sided.

At 4:18 Moses asks his father-in-law, and employer, for permission to return to Egypt. Jethro (last we knew he was named Reuel) grants permission. And, in case you were concerned, God tells Moses that those who were seeking his life in Egypt (for the murder of the Egyptian?) have all died.

With no obstacles in his way, Moses packs up his wife Zipporah and their sons and heads for Egypt. And yes, I said sons. Plural. Though we know only of Gershom, the text does say "sons."

Interestingly God refers to Israel (the nation) as "my firstborn." Israel (the individual) was not his father's firstborn, but received the blessing and inheritance reserved for the firstborn. Foreshadowing events to come, God says that he will kill the Pharaoh's firstborn. 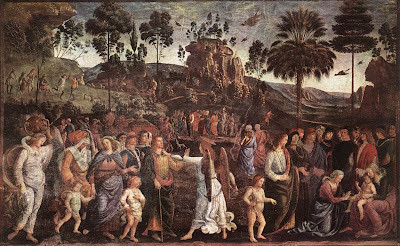 Verse 24-26 contain one of the strangest episodes in the Bible. When Moses stops for the night, YHWH tries to kill him. Or maybe his son. The text is not clear. Zipporah circumcises her son (Gershom?) and either throws the foreskin at Moses' feet, or touches it to his genitals, or something. ("Feet" is a euphemism for genitals in biblical Hebrew. Remember that. We'll encounter it again.) Was God angry because Moses hadn't circumcised his son? Why didn't he say so before? Does circumcision have apotropaic power? That is, does it serve as a kind of magical protection? What does Zipporah mean by saying "bridegroom of blood?" Does she, a Midianite, object to the requirement of circumcision?

It just is not clear.

When I encounter unclear passages like this, I sometimes like to look at the same passage in the Septuagint (abbrieviated LXX), the ancient Greek translation of the Hebrew Bible. Modern translators sometimes amend ambiguous passages of Hebrew in light of the LXX. The Septuagint may not provide a definitive interpretation, but it does can some idea of how an ancient translator dealt with difficult passages. In this case, the LXX is not at all helpful. It is every bit as weird as the Hebrew text. In the LXX, instead of "bridegroom of blood," Zipporah says, "The blood of my son's circumcision stands" or "is stopped" or, as the New English Translation of the Septuagint puts it, "is staunched."

Somewhere in my education, someone told me that this little incident comes from a very ancient source. Maybe the original was clearer. We can only hope.

Chapter 4 ends with Moses and Aaron meeting up and going down to Egypt where they assemble the elders of Israel.

In chapter 5, Moses tells Pharaoh to "Let my people go." He only asks permission for the Hebrews to take a 3 day excursion into the desert to worship YHWH. Is this a deceptive ploy?

Pharaoh's response is derisive. "Who is this YHWH?" He tells the Hebrew's taskmasters to make the Hebrews' lives more difficult by no longer providing them with straw to make bricks. They must now gather their own straw and still produce the same daily quota of bricks. Pharaoh's tactic reminds me of the old bit of office humor, a sign that read: "The floggings will continue until morale improves."

This turn of events makes the Israelites unhappy with Moses. Moses takes their complaint  to God and adds his own.

Chapter 6 is another arbitrary division in the text. It begins with YHWH's reply to Moses. The Lord repeats his promises of deliverance. When Moses takes these words to the Israelites, they don't listen. They are too heavily burdened and demoralized.

The Lord sends Moses to Pharaoh again, but Moses asks, reasonably, "If the Israelites won't listen, why would Pharaoh?"

The narrative is interrupted here by a genealogy of Moses and Aaron that emphasizes the fact that they are Levites. Curiously Aaron's sons are mentioned here, but Moses' half-Midianite offspring are not.

Chapter 6 ends with a doublet repeating God's command to Moses to present himself to Pharaoh, and Moses' balking, "Why would Pharaoh listen to me?"