THE YEAR OF BLOGGING BIBLICALLY: DAY 17 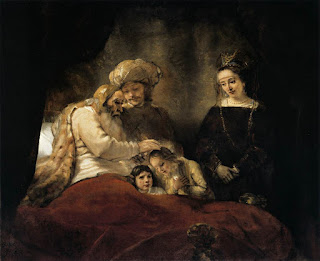 In Genesis 48 Joseph and his sons, Manasseh and Ephraim visit the dying Jacob.. The old man rouses himself to recall God's promise to him at Luz which we read of in chapter 35. He also mentions that he buried Joseph's mother at Ephrath, that is Bethlehem, a little town that will become important later in the biblical narrative.

Jacob makes Joseph's sons his own, giving them full status as ancestors of tribes in Israel. Jacob favors the younger brother, Ephraim, over the elder, Manasseh, continuing a theme we've encountered before.

Jacob gives Shechem to Joseph saying that he won it with his own sword and bow. Technically it was his sons who took Shechem. Sociologists talk about a "collectivist personality" in some cultures. Maybe that's what is in play here. My family's honors are my honors. Their shames are my shames.

Joseph receiving an extra portion (Hebrew shechem gives him an inheritance rightly belonging to Reuben, the firstborn. Joseph always was the favorite. More on this below.

In chapter 49 Jacob summons all of his sons to his deathbeds and blesses them. Some of these blessings sound more like curses. There are a lot of intertextualities in this chapter: allusions to events from earlier in the narrative and to events that will come later.

Reuben, Simeon, and Levi are out of favor: Reuben because he had sex his father's concubine--a pretty good way to forfeit one's birthright; Simeon and Levi for their violent destruction of Shechem. Wait. Didn't Jacob just take credit for that?

With the first three in birth order out of the picture, Judah, who has been a stand-up guy, gets the lion's share (see what I did there?) of the blessing. The tribe that bears his name will prevail in the narrative future. The "eternal" kingship of David's line will come from Judah. Why the scare quotes? Well, David's dynasty doesn't last forever, at least not until it gets a radical reinterpretation in the gospels.

The remaining brothers get scant notice except Joseph. Joseph's blessing alludes both to his troubles with his brothers and to events in the narrative future.

The last chapter of Genesis tells how Jacob was embalmed and buried with elaborate Egyptian dignities. True to his oath, Joseph buries his father in the tomb where Abraham and Sarah, Isaac and Rebekah, and Jacob's first wife, Leah (but not his beloved Rachel) were buried.

There is another scene of reconciliation between Joseph and his brothers reinforcing a major theme of the book. God brings good from intended harm.

Finally, Joseph, who has lived to the age of 110 and dandled his great-great-grandchildren on his knees, dies. He is embalmed but not buried. He has asked that his remains be taken to Canaan.

And so they shall.

Posted by Brant Clements at 1:29 PM