THE YEAR OF BLOGGING BIBLICALLY: DAY 8 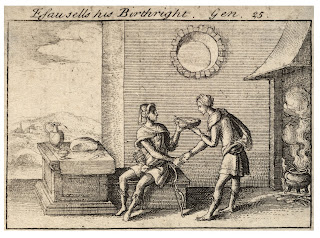 Genesis 25 opens with notice of Abraham's second marriage. Whether he married Ketura before Sarah's death or after is not entirely clear to me. Whether he had other concubines is also in question. Among his children by Ketura is one Midiah, whose descendants, the Midianites will play a role later in the biblical narrative.

Isaac is Abraham's sole heir. His other children receive gifts from Abraham while he is alive, but Isaac alone inherits Abraham's property and God's promise.

It is notable that Ishmael returns and helps Isaac bury their father.

Like Sarah before her, Rebekah is infertile. Isaac's prayer is the instrument of her healing. Barren women and miraculous births make a recurring theme throughout the Bible.

Isaac and Rebekah have twin sons. The firstborn is named Esau which means something like "rough." He will be a red, rough, hairy man. The younger is born grasping his brother's heel. "To grasp by the heel" is an idiom meaning "usurp" or "supplant." He will live by his wits all his life and will take his brother's birthright and blessing.

Jacob is not a nice guy. God, seemingly, does not choose his people on the basis of their personal virtue.

Still, as YHWH tells Rebekah while she is pregnant, the older twin will serve the younger. This is another theme in Scripture. God seems to have a preference for younger sons. So far we have seen Abel approved over Cain and Isaac chosen over Ishmael. Now Jacob is accepted over Esau.

Being a younger son myself, I kind of like this.

Isaac, Rebekah, and their boys are a dysfunctional family group. The parents play favorites with their children. Rebekah will scheme with Jacob against Isaac and Esau. This is not a pretty domestic scene.

For about 10 years I served as chaplain to a home for troubled kids. It was during that time that I realized just how messed up the Patriarch's families really were. The children in our care came from family backgrounds like these. God, apparently, does not choose his people based on their family values.

When the boys are grown, and Esau, after a an unlucky day hunting, is famished, Jacob sells him a bowl of lentil stew in exchange for his birthright. The birthright is the elder son's larger portion of a father's estate. Even though Jacob callously takes advantage of Esau, it is Esau who stands the blame in the narrative. The narrator's voice tells us that Esau "despised his birthright."

In the story about the birthright, Esau is given another name, Edom. We are still dealing with the mythic stories of the origins of nations. Esau's descendants, the Edomites will feature in later stories. Jacob, of course, will be the ancestor of the twelve tribes of Israel.

In chapter 26, Isaac meets up with our old friend King Abimelech. Like his father, Abraham, Isaac plays the old "my wife is my sister" scam in Gerar. The acorn does not fall far from the tree. When the king discovers the ruse, there are no negative consequences for Isaac, though Isaac doesn't get the big payoff that Abraham did.

Still, Isaac prospers in Gerar. Enough so that he is asked to leave. There are some issues about wells and water rights. Abimelech and Isaac make a non-aggression pact, just as Abraham and Abimelech did. We are given another explanation for how Beer Sheba got its name. (The first one was back at 21:31).

Chapter 26 ends with a note about Esau's marriage to two Hittite women and his parents' disapproval.


What do you think? Do you like it that God works through dysfunctional families and disreputable characters?