THE YEAR OF BLOGGING BIBLICALLY: DAY 16

If God calls you by name, whether you are awake or dreaming, the proper response is "Here I am" or, if you prefer the original Hebrew, "Hineni." It is also the correct response if another person calls you by name. It is how Abraham answered God (and also his own son, Isaac) in Genesis 22. It is how Jacob answered Isaac in chapter 27. It is how Jacob responded to an angel in a dream in chapter 31. And now, in chapter 46, Jacob responds to God in another dream saying, "Hineni. Here I am." Moses and Samuel will also respond to God in the same way.

In Jacob's dream, God promises to go with him to Egypt where he will be reunited with his son, Joseph. Jacob packs up the whole family (70 persons including those already in Egypt but excluding daughters-in-law) and goes. Reading that list of names makes me wonder why no one ever calls their children Huppim, Muppim, or Ard these days.

No, it doesn't really.

Jacob and his literally long-lost son Joseph are reunited in a tearful scene. The Jacob's descendents are settled in the land of Goshen, away from the majority of the Egyptians who find shepherds abhorrent. 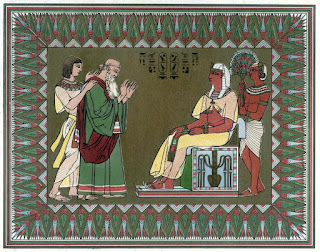 In Genesis 47, Jacob is presented to the Pharaoh whom he blesses. Twice. Though he is 130 years old, Jacob says that his years have been "few." He will live another 17 years. He also says that his life has been "difficult" and who can argue?

As Pharaoh's administrator, Joseph parleys the famine, and the stores of grain he has laid up, to a huge advantage for the Pharaoh. This, I suppose, shows Joseph's wisdom. Without putting too fine a point on things, we could say that Joseph exploits the starving population.

As Jacob begins to look toward the end of his life, he has Joseph swear another one of those "thigh" oaths (see my comments on Genesis 24). "Don't bury me in Egypt," he says.

There isn't really a lot to say about these two chapters except that they advance the story and get all of Jacob's offspring in Egypt.

Am I overlooking anything?