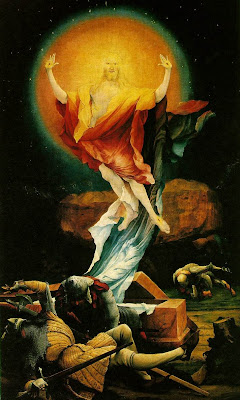 An inner panel from Grunewald's Isenheim altarpiece depicts the resurrection of Jesus, conflated, perhaps with the ascension and transfiguration.

Jesus has burst living, transformed, radiant from the tomb. The soldiers placed as guards are knocked to the ground by the suddenness (is it too much to say "violence?") of the resurrection. The foremost soldier, his helmet askew, raises a helpless arm perhaps to defend himself, perhaps to shield his eyes from the light streaming from Christ's face. In the background, another soldier is falling to the ground in an attitude that suggests obeisance. The risen Jesus conquers both death and the earthly forces of imperial oppression.

The margins of Jesus' face are obscured by the light beaming from it. His hair and beard shine, not blonde like Dali’s surfer-boy Jesus, but heavenly gold. I love the play of light and color on the unwinding shroud. Christ's resurrection body still bears the wounds of nail and spear, but now they glow with golden radiance. All other wounds are healed. The body of Jesus in Grunewald’s crucifixion was diseased and anguished. Now he is restored, not only to life, but to health.

I read somewhere long ago that miracles of healing were attributed to the Isenheim altarpiece. Patients at the St. Anthony’s monastery hospital were instructed to meditate on the crucifixion panel in which Jesus bore the signs of illness like their own. At a high mass, perhaps on Easter, the altarpiece was opened to reveal the resurrection scene, and patients were restored to health.

St. Athanasius said Jesus “became what we are that we might become what he is.”