A MAN OF SORROWS AND ACQUAINTED WITH GRIEF 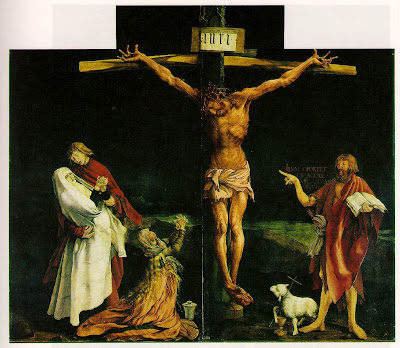 In the second decade of the sixteenth century, Matthias Grunewald painted the elaborate altarpiece that adorned the hospital chapel of the Monestary of St. Anthony in Isenheim, Alsace. The altarpiece is now displayed at the Unterlinden Museum in Colmar, France. The crucifixion depicted here is visible when the altarpiece is closed. I have only seen it in reproductions, but I have seen one of Grunewald's smaller paintings of the crucifixion in person.

This is not a pretty painting, but neither was Jesus' crucifixion pretty. The figure of the crucified Christ dominates the composition. It is not only central to the painting, but the figure on the cross is noticeably larger than the other figures.

To the left of the cross, that is the viewer's right, is the anachronistic figure of John the Baptist. The Gospel accounts make clear that John was dead well before the crucifixion of Jesus. His pointing gesture and the symbolic lamb at his feet show his role here to be the same as that in the Gospels. "Behold," he says, "the Lamb of God" The Latin motto behind the Baptist is taken from John 3:30 "Illum oportet crescere me autem minui." ("He must increase but I decrease.")

On the opposite side is a trio of figures commonly shown at the foot of the cross. In white, Jesus' mother Mary faints with grief. She is supported by the beardless young disciple John. Kneeling, an alabaster jar of embalming ointment beside her, is the penitent Magdalene, her suppliant hands twisted with sorrow. The faces or all three are expressionistic masks of grief.

The Christ is dead. His eyes are closed, head slumped, jaw slack. His recent agonies are evident. The body is gangrenous, the lips hypoxic blue, the hands and feet gnarled with pain, the abdomen hollow. The corpus bears the marks of scourge, nail and spear as well as the unbiblical detail of thorns piercing flesh all over the body.

The hospital of St. Anthony's monastery specialized in the care of patients suffering skin diseases. The Crucified in Grunewald's painting bears the marks of their diseases. The crucified Savior shared their lot.

The crucified Christ shares the lot of all humanity.

I found the image of Grunewald's crucifixion here.
Posted by Brant Clements at 9:18 PM