WHAT WE LEARNED; WHAT WE SHOULD LEARN 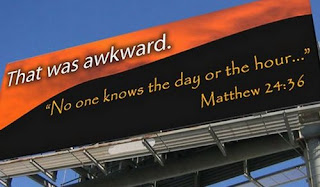 May 21, 2011 has come and gone without apocalyptic event. This leaves Radio Preacher and Doomsday Prophet Harold Camping "flabbergasted." It affords the rest of us an opportunity to ask "What lessons do I take away from this?" Let me suggest a few:

We all ought to learn that Date-setting and speculating about the Apocalypse is a waste of time and money. Some of Camping's followers have apparently been left destitute because they took the man at his word. In the meantime the money and work-hours poured into spreading Camping's false message might have been used to do some real good in the world--feeding the hungry, healing the sick, comforting the afflicted. You know, the stuff Jesus' followers should be doing. And while I think that Camping's failed predictions should warn us all off of setting dates for the judgment day ever again, I doubt that we will learn this lesson. After all, we didn't learn it in 1844, 1992, 1994,  1998, et cetera, et cetera, et cetera.

We should also learn that saying "the Bible guarantees it" doesn't make a thing true. Camping assured us that the Bible said that there is a rapture, and that it would occur on May 21, 2011. Of course, the Bible says no such thing. It was Harold Camping's interpretation of the Bible that said this. In this case, the Bible was not wrong. Camping was.

I've said several times in these blogposts that the most rigorous logic will yield false conclusions if it begins from false premises. Harold Camping's predictions had a sort of mathematical logic that may have seemed convincing, but he started with false notions about the Bible and how it works.

We ought to learn that there is a difference between believing and knowing. Let me quote Dr. James McGrath,

"The feeling of certainty is easy to acquire. Actually being right is much harder to accomplish, and having good reasons for feeling confident that you are right is harder still."

We are all well served by a healthy sense of doubt concerning even our own most closely cherished beliefs.

Finally, I have learned that using the right search terms in the title of a blog post can yield big results. This blog usually gets a dozen or so hits each day. On Friday, May 20, it was viewed 676 times. On Saturday, May 21, it scored 873 hits. Most of that traffic went to a post titled "The Rapture Will Not Happen May 21, 2011." For certain queries, that post was the first result for a Google search. Perhaps the more significant take-away from my sudden traffic surge would be: The apocalypse is big business.


The quote about learning from history was from the song "Master of Love" on Judy Henske's brilliant 1999 album Loose in the World. I think maybe God didn't end the world in 1998 so that the album could be made. The picture of the billboard came from this website.
Posted by Brant Clements at 3:49 PM