A Rabbi, A French Printer and Harold Camping....

OR, WHAT DOES ROBERT ESTIENNE HAVE TO DO WITH AMERICA’S FAVORITE DOOMSDAY PROPHET? 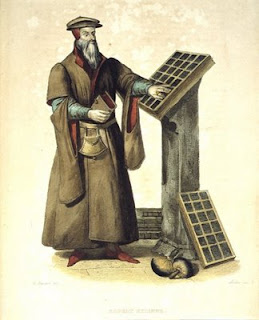 Harold Camping is the radio preacher who has predicted that all true Christians will be raptured out of the world next Saturday, May 21, 2011. His interpretations of the Bible are idiosyncratic to say the least, but they are not unprecedented. Guys like Camping don’t arise out of nowhere.
The elaborately bearded gentleman pictured here is one Robert Estienne  (1503-1559) whose name is often latinized to Robertus Stephanus. Stephanus was a classical scholar and printer of books. He published four editions of the Greek New Testament. The fourth of which, published in 1551, contained an innovation that concerns us here: verse numbers.
Stephanus was not actually the first person to divide the New Testament into numbered verses, but his system of numbering was the one that caught on. It is still used in our modern New Testaments. The Hebrew Bible (the Christian Old Testament) uses an even older numbering system which is attributed to Rabbi Isaac Nathan ben Kolonymus, who employed  it in a concordance published in 1523.
Verse numbers are immensely helpful for students of the Bible. They give us an easy way to navigate through the Scriptures. They make it possible for persons using different versions of the Bible to find the same spot in reading. For this we owe Stephanus and Rabbi b. Kolonymus a debt of gratitude.
Useful as they are, Stephanus’s verse numbers are sometimes strange. For example, he occasionally divided sentences at odd places. Legend (well, joke really) has it that he marked out his verse numbers while riding on horseback. Occasionally the horse would stumble and Stephanus would drop the pen at a random spot on the page. My Greek New Testament reading group has cursed Stephanus’ horse more than once.
The worst thing about verse numbers is that they make the Bible seem to be a collection of verses. Verse numbers break up sustained thoughts. Verse numbers make it seem that every verse is of equal weight and importance. They make it possible to take a fragment of a thought from Jeremiah and combine it with a completely unrelated verse from James as if it made sense to do so.
And this is the stock in trade of Harold Camping and others of his ilk.
There is an old joke about a woman who opened her Bible to a random verse each day to learn God’s will for her life. One day she opened to Matthew 27:5, “ [Judas] went out and hanged himself.” Thinking there must be a mistake she tried again and found Luke 10:37, “Go and do likewise.”
I found the picture of Robert Estienne here.
My favorite Bible verse to read out of context is 1 Chronicles 1:25. Know it from memory? Anyone?
Posted by Brant Clements at 8:49 PM