THE YEAR OF BLOGGING BIBLICALLY: DAY 228 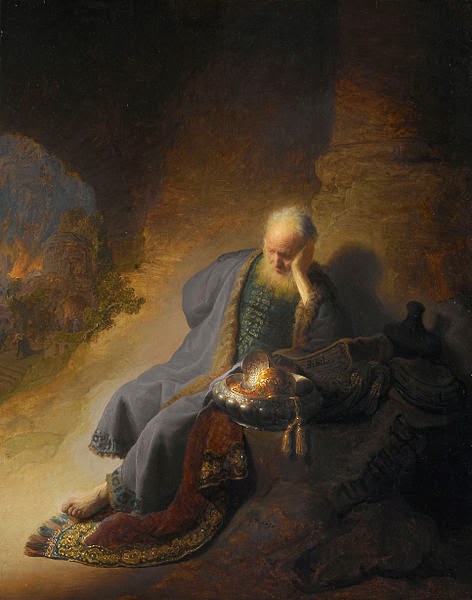 There was, apparently, a drought which is poetically and graphically described in Jeremiah 14:1-6. It was the occasion of repentance on behalf of the people of Judah (vv. 7-9). They ask why YHWH is unwilling or unable to help. In verse 10 YHWH tells them: he's tired of being rejected, now he is rejecting them. In verses 11-12 YHWH tells Jeremiah not to pray for the Judahites. It won't do any good.

In verses 13-16 YHWH addresses the other prophets of Jerusalem. They are a bunch of liars and will be destroyed.

Therefore this is what the Lord says about the prophets who are prophesying in my name: I did not send them, yet they are saying, ‘No sword or famine will touch this land.’ Those same prophets will perish by sword and famine.
(Jeremiah 14:15)


In verses 17-18 YHWH mourns over the destruction of his people. He's not inclined to do anything about it, but it saddens him. In verses 19-22 the people cry out and confess and ask for rain.

The book of Jeremiah is replete with the language of relationships: dysfunctional, enmeshed, difficult, acrimonious relationships. YHWH, the people of Judah, and Jeremiah, none of them are happy but they can't seem to work out their differences.

Chapter 15 begins with YHWH telling Jeremiah that even if Israel's greatest intercessors, Moses and Samuel, stood before him, he would still visit four kinds of destruction on Judah:

“I will send four kinds of destroyers against them,” declares the Lord, “the sword to kill and the dogs to drag away and the birds and the wild animals to devour and destroy.”
(Jeremiah 15:3)

In verses 10-18, Jeremiah, whose task has not been light, regrets ever having been born. He accuses YHWH of tricking him:

In chapter 16 YHWH tells Jeremiah not to get married and not to have children, because the children of Judah

...will die of deadly diseases. They will not be mourned or buried but will be like dung lying on the ground. They will perish by sword and famine, and their dead bodies will become food for the birds and the wild animals.


In fact, Jeremiah should not take part in such ordinary activities as feasting and mourning. In light of the pending disaster it is all futile.

Verses 14-18 take a happier turn. YHWH promises to restore Israel. I can't make out whether this refers to the northern kingdom which has already been destroyed, or to Judah (all that remains of Israel) which is soon to be destroyed. I'm inclined to think the latter because of the reference to "the north" in verse 15, but I hold that opinion lightly.

In verses 19-20 the people reject idols. YHWH responds (v. 21) by promising to teach them.

Chapter 17 opens with a statement about just how deep-seated are Judah's idolatrous ways.


Verses 5-8 are a poem which the New Interpreters Study Bible points out, "echoes Psalm 1, although the direction of literary dependence is not clear." The point of the poem is that Judah will flourish if the people trust in YHWH. The NISB notes suggest that this oracle may have been addressed to the exiles.

Verses 9-11 declare that YHWH is judge. Verses 12-13 are a brief statement of praise and a reiteration that the people should be faithful. Verse 13 describes YHWH as a "fountain of living water." The Gospel of John will apply this image to Jesus (cf. John 4).

In Jeremiah 17:14-18 the prophet speaks personally to YHWH once again, though his tone is gentler, his words a bit more measured than previously. He asks the Lord for support against his detractors.

Verses 19-27 are another prose sermon, this one at Jerusalem's People's Gate. The topic is sabbath keeping. Observing the sabbath will bring blessings. Failure to do so will bring punishment, destruction by fire.


Unless otherwise noted, biblical quotes are from the New International Version. Next: Jeremiah 18-22
Posted by Brant Clements at 8:58 PM