THE YEAR OF BLOGGING BIBLICALLY: DAY 234 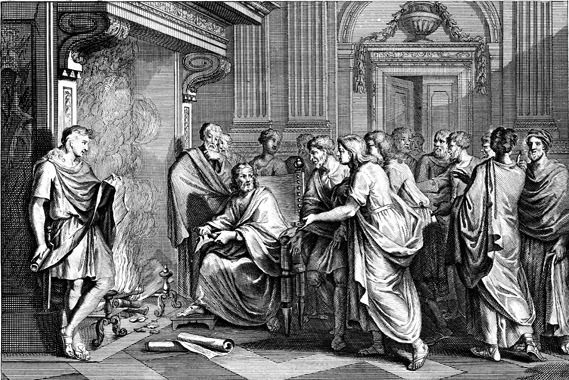 You may be forgiven if you don't remember the Jehonadab (aka Jonadab), son of Rechab (or Rekab), ancestor of the Rekabites. We met him way back in the tenth chapter of 2 Kings where he and Jehu turned a temple of Baal into a latrine. Apparently Jehonadab also gave his descendants some instructions. As they express it to Jeremiah:

We do not drink wine, because our forefather Jehonadab son of Rekab gave us this command: ‘Neither you nor your descendants must ever drink wine. Also you must never build houses, sow seed or plant vineyards; you must never have any of these things, but must always live in tents. Then you will live a long time in the land where you are nomads.’ We have obeyed everything our forefather Jehonadab son of Rekab commanded us.
(Jeremiah 35:6b-8a)

Apparently the Rechabites have come into Jerusalem to escape the Babylonian threat. When they refuse Jeremiah's offer of wine, he holds them up as exemplars of faithfulness in contrast to the people of Judah and their king, Jehoiakim.

This story is out of chronological order but has probably been placed here because of the contrast that it makes to the disobedience of the Judahites in the matter of freeing (and then not freeing) their slaves in the preceding chapter.

The narrative of chapter 36 is also set in the time of Jehoiakim. Here Jeremiah enlists the help of Baruch (we met him in chapter 32, verse 12) in making a scroll of his dire prophesies. For some reason (that temple sermon maybe?) Jeremiah is barred from the temple premises. So he sends Baruch to read the scroll to the worshipers there. Some of Judah's officials then ask Baruch for a private showing. Keeping the scroll, they send Baruch and Jeremiah into hiding. Then the officials read the scroll to the king who, in a show of apparent unconcern, cuts it up and burns it a bit at a time. Jeremiah and Baruch then make a new scroll and add a few harsh words for Jehoiakim. He will have no successor to sit on his throne (v. 30). This is almost true. His son Jehoiachin does reign in Jerusalem but only for three months.

Chapter 37 brings us back to the reign of Zedekiah. The Babylonians have begun a siege of Jerusalem but call it off when the Egyptians intervene. Jeremiah warns that the Babylonians will be back. YHWH's wrath cannot be escaped. When he tries to leave for Anathoth to claim some property (probably not the field he redeemed in chapter 32 if the Harper Collins Study Bible is to be believed) he is arrested on suspicion that he is going over to the Babylonians. Jeremiah is imprisoned under harsh conditions. Zedekiah, seeking some word from YHWH summons Jeremiah privately. Jeremiah gives him bad news. But, when the prophet asks for a little mercy, the king arranges for Jeremiah to be given better accommodations and rations, though they may be short rations. A loaf of bread a day doesn't sound like much. When the siege is renewed, however, Jeremiah may have been eating better than many of his fellow citizens.


Biblical quotations are from the New International Version. The illustration came from the Pitts Theological Library website. Next: Jeremiah 28-41
Posted by Brant Clements at 12:00 PM