THE YEAR OF BLOGGING BIBLICALLY: DAY 258 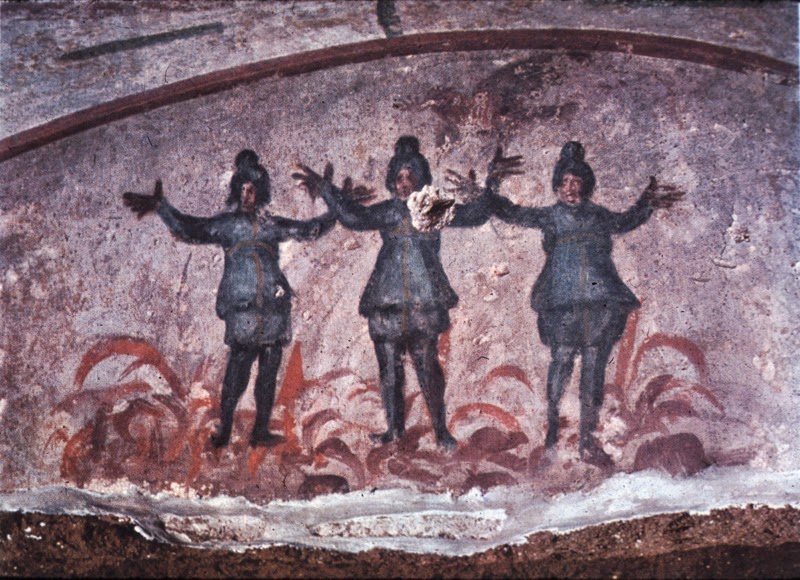 The book of Daniel calls the king of Babylon by his Babylonian name: Nebuchanezzar. Elsewhere in the Hebrew Bible this same king is called "Nebuchadrezzar."

The situation of the book of Daniel is established in Chapter 1. In the third year of Jehoiakim's reign (601 BCE), Nebuchadnezzar has conquered Jerusalem and taken captives some of the Temple treasures to Babylon. This doesn't quite jive with the account in 2 Kings 23-24 in which the first of the Temple treasures and deportees are taken in 597, during Jehoiachin's reign. Not taking Daniel as a literal recounting of historical events, I don't let this bother me.

Among the people exiled at this time are four young men with good Hebrew names: Daniel, Hananiah, Mishael, and Azariah. The -el and -iah suffixes in their names give them away. They are references to the Hebrew God (Elohim), the Lord (YHWH). They are impressed into service as courtiers to Nebuchadnezzar who renames them in honor of his own gods, Bel, Marduk, and Nabu. They are, in order, Belteshazzar, Shadrach, Meshach, and Abednego.

Daniel and company keep kosher. Insisting upon eating only vegetables, they nevertheless flourish physically. God is with them. They are wiser than the sages of Babylon.

Daniel 2 is set in the second year of king Nebuchanezzar's reign, that is, 603 BCE. This is two years before Daniel is supposed to have been taken to Babylon. Again, not taking Daniel as as a literal recounting of historical events, I don't let this bother me.

In this chapter Nebuchadnezzar has a dream. He makes the absurdly impossible request that his wise men not only interpret the dream, but also tell him what it was. When the "magicians, enchanters, sorcerers, and astrologers" (NIV) demur, the king threatens to have them all killed. Daniel comes to the rescue. God enables him to describe the king's dream. The dream involves a statue made, from the top down, of materials that decrease in value. The head is gold. By the time we reach the feet, they are made of iron mixed with clay. The various parts represent a succession of kingdoms. Babylon is the head. The NIV Study Bible (which I referenced in my previous post) says that the feet are "unmistakably Rome."

It seems much more likely that the feet represent the empire of Alexander of Macedon which, after Alexander's death, was divided between the Seleucids and the Ptolemies who held control over Judea at different times. This interpretation, which dates back to at least the fourth century CE, is favored by the Harper Collins Study Bible, the Jewish Study Bible, and others.

Because he interprets Nebuchadnezzar's dream, Daniel is elevated to a high position. He brings his buddies, Shadrach, Meshach, and Abednego along. If you miss the echoes of the story of faithful Joseph interpreting dreams in the court of Pharaoh (Genesis 41), you haven't been paying attention.

In chapter 3, Nebuchadnezzar builds an impossibly tall statue. Literally, it is impossible to build a statue 60 cubits high and only 6 cubits wide. It simply wouldn't stand. Do I have to say it? Not taking Daniel as a literal recounting of historical events, I don't let this bother me.

Nebuchadnezzar orders that all of the "satraps, prefects, governors, advisers, treasurers, judges, magistrates, and all the other provincial officials come to the statue's dedication. When they hear the sound of "the horn, flute, zither, lyre, harp and all kinds of music" (NIV)  the people of every nation and language are to prostrate themselves in worship before the statue. The lists of officials and musical instruments are repeated several times through this chapter, I believe for comic effect. The New Living Translation, a highly readable version of the Bible undercuts the effect by listing all of the instruments once and then simply referring to "the musical instruments." Pity, that.

The penalty for failure to worship is death by immolation in a "blazing furnace." Shadrach, Meshach, and Abnego, pious Jews that they are, refuse to worship an image. Daniel is mysteriously absent from this chapter. Nebuchadnezzar has the furnace super-heated, 7 times hotter than usual. This is, I believe, more comic exaggeration. The Jewish men are tossed into the furnace, the heat of which kills their captors. The young men, however, are seen wandering around, alive and unharmed, in the flames. There is a fourth, divine, figure with them. Nebuchadnezzar calls for the Jewish men to come out of the furnace and worships the Hebrew God.

These stories are fun. They are funny. They were told, I think, to entertain and to encourage Jews living in the diaspora to be faithful, to keep kosher, and to avoid syncretism.

The image of the catacomb painting of Shadrach and pals came from wiki. I can't read this story without thinking of my seminary roommate, a preacher's kid, who said his father would signal bedtime by referring to "Shadrach, Meshach and To-Bed-We-Go!"