THE YEAR OF BLOGGING BIBLICALLY: DAY 257 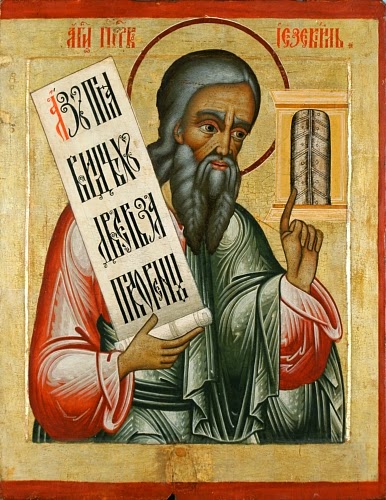 Today we put a wrap on Ezekiel.

In chapter 45 we read about the king's ("prince's") participation in the Passover rituals in Ezekiel's ideal vision of a restored Jerusalem. Ezekiel 46:1-15 describes the other annual festivals, as well as the Sabbaths and New Moons. Much attention is given to how and where people enter and exit the Temple.

I wonder if Ezekiel's preference for the term "prince" when referring to kings reflects a theological bias. YHWH is king. Everyone else, no matter how powerful, is subordinate.

Verses 16-18 are concerned with how and to whom the princes may give inheritance. By no means should the king take away an inheritance from the poeple.

In chapter 47 water flows from the restored Temple nourishing the land and making even the Dead Sea fresh. The River of Life in Revelation 16 owes much to this image. I don't know if the connection to Psalm 46:4 is deliberate:

There is a river whose streams make glad the city of God,
the holy habitation of the Most High.
(NRSV)


Verses 13-23 describe the boundaries of the restored Israel. A note in the Jewish Study Bible says:

The boundaries of the land are an idealized portrayal of the greatest extent of the Davidic kingdom and Jeroboam II.

In chapter 48 the land is apportioned equally to the 12 tribes of Israel. A portion is set aside for the Levites. The prince also receives a portion which brackets the Levitical portion.

Ezekiel describes the restored Jerusalem as having 12 gates. In Revelation, John of Patmos sees the heavenly New Jerusalem having 12 similar gates, each made of pearl.

Ezekiel ends with a note that the restored Jerusalem will be called "YHWH is there."