THE YEAR OF BLOGGING BIBLICALLY: DAY 260 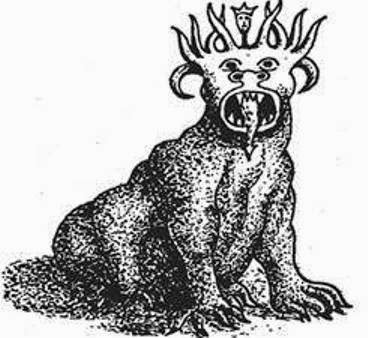 If you wait breathlessly for each new installment of "The Year of Blogging Biblically" (and if you do you are probably the only one) please accept my apology for the long delay between the last post and this one. Things tend to get busy as Easter approaches for those in my vocation. Now that the celebration of the day of resurrection is past I should be able to devote myself to this series more wholeheartedly.

The last six chapters of Daniel consist of a series of apocalyptic visions. These chapters are weird. But that's redundant. Apocalyptic literature is, by definition, weird.

Apocalypses are characterized by highly symbolic visions concerning the end of time. They are typified by dualistic thinking: good and evil are at war; events in the heavens mirror events on earth. The visions are often, as in the case of Daniel, narrated by a famous hero from the past.  Often there is a heavenly being who serves as interpreter and guide. In the visions of Daniel that role is played by Gabriel.

The purpose of apocalyptic literature is to give courage and hope to oppressed or persecuted believers. No matter how bad things seem, God is in charge. God will prevail.

But the holy people of the Most High will receive the kingdom and will possess it forever—yes, for ever and ever.
(Daniel 7:18 NIV)


One of my Old Testament profs called Apocalyptic "religion for the short run."

In a previous post I noted that interpreters handle the four kingdom scheme of Daniel's visions differently. Some interpret the 4 kingdoms as Babylonian, Persian, Median, and Greek (technically Macedonian, I guess). Others interpret the kingdoms as Babylonian, Perso-Median, Greek, and Roman. The CEB Study Bible notes helpfully split the difference. The original intent was to to make the Alexander's Greek empire the last kingdom. Later, when Daniel started to be considered Scripture, the Roman empire was dominant over Judea and the 4 kingdoms were interpreted to end with the Romans.

Because apocalyptic symbolism is intentionally vague such reinterpretations are common. There is, however, a very real danger in this kind of reinterpretation. In the 19th century William Miller interpreted Daniel to mean that Jesus would return in 1843. More recently commentators have claimed that the locusts in the 9th chapter of Revelation represent helicopters. It is wise, I think, to consider what an apocalyptic text meant in its own time before trying to apply it to one's contemporary situation.

And please keep in mind that Judea, under the Greeks and Romans might legitimately plead persecution. Ditto first century Christians in Asia Minor. Applying apocalyptic writings from their times to modern American Christians is a horrible misuse.

Daniel 7 narrates a vision of 4 beasts representing 4 kingdoms. The boastful little horn (v. 8) is Antiochus IV Epiphanes who famously desecrated the temple. They are presented to the "Ancient of Days" (God) and found wanting. Finally one like a "Son of Man" is brought forward.

Daniel 8 is a vision of a ram and a goat. The rams two horns, representing the Persians and the Medes, lends itself to the 4 kingdom scheme ending with the Romans.

In chapter 9, Daniel offers a prayer that reinterprets Jeremiah's prophecy of a 70 year exile (c.f. Jeremiah 25). In Daniel the 70 years become 70 "weeks" of years (70 x 7 = 490). The number is probably not meant literally but stands for a long, long time. The "anointed one" in this chapter, like the Son of Man  in chapter 7, probably originally meant either Zerubabel or the high priest Joshua.