Susan Hogan has a pretty good website at www.prettygoodlutherans.com. Actually, it is a lot better than pretty good. Yesterday, she posted the news that Lutheran CORE has announced its plan to organize as a new church body. Read about it here, and don't miss the comments.

Susan's story for February 17 made me wish I lived in Iowa.

Speaking of comments, fellow Lutheran pastor and blogger Robert Lee Bennight has a thoughtful post about CORE's repeated assertion "We're not leaving the ELCA. The ELCA has left us."

And in this post at www.theliberalspirit.com, Obie Holmen notes an irony. Dire predictions that ecumenical dialogue would be damaged if the ELCA voted to ordain non-celibate homosexuals have not come true. The Vatican remains in dialog with the ELCA. It is ELCA Lutherans who refuse to talk to one another. 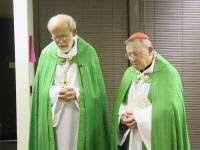