For the time bei 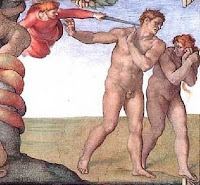 ng, the Lutheran Church-Missouri Synod (LC-MS) is the second largest Lutheran Church Body in North America. We will see if this remains the case when the various splinters from the Evangelical Lutheran Church in America (ELCA) are done breaking away. It is fair, in a general way, to say that the LC-MS is more conservative than the ELCA, though I am not sure that the categories of conservative and liberal are the best way to understand our differences.

I am a Lutheran, born, bred, baptized, Sunday-schooled, confirmed, educated and ordained. I expect that I will be buried a Lutheran. Still, I say in all honesty, that if the LC-MS were the only Lutheran Church body, I would have to seek another denomination. If the LC-MS were the only Christian denomination, I would seek another religion. There is no place for me in the LC-MS and I think that most Missouri Synod clergy would agree with me on that.

So, it may surprise readers of this blog to learn that I agree with at least one thing that the LC-MS says about homosexuality. This statement comes from the LC-MS website:

I am not entirely clear as to what constitutes "homophile behavior." Same-sex hand holding? Kissing? (These things look different depending on one's cultural context). Feeling aroused looking at a Calvin Klein ad? It really does not matter, though. I appreciate that the LC-MS is careful to distinguish act from orientation. I will take "homophile behavior" to be an inelegant circumlocution for "gay sex."

And I agree with the Missouri Synod that gay sex is intrinsically sinful.

Human beings are sinners. We live in a state of sin, separated from God. Apart from God we can do nothing good. I would venture to say that there is always a human, selfish, sinful component to sexual expression.

So yes, gay sex is intrinsically sinful, but in that way it is no different than straight sex, or any other human act.


The illustration accompanying this post is a portion of the Sistine Chapel ceiling. It is Michaelangelo's depiction of Adam and Eve being expelled from Eden. An advance reader of this post asked what it adds to the conversation. I replied, "What I hope to do with this post is advance the understanding of sin as the human condition, and to counter the assertion that gay sex is somehow more sinful than other human sex acts."
Posted by Brant Clements at 1:11 PM