A Subtle Form of Works Righteousness

For by grace you have been saved through faith, and this is not your own doing; it is the gift of God— not the result of works, so that no one may boast. Ephesians 2:8-9 (NRSV) 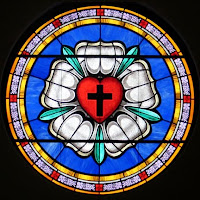 The doctrine of justification by grace through faith apart from works of the law is absolutely central to Lutheran theology. We cannot make ourselves right with God. Only God can save us. Lutheranism stands or falls on the truth of this doctrine.

Lutheran pastors, preachers and theologians must guard this doctrine closely because it is not easy to maintain. Children of Adam and Eve that we are, we like to imagine ourselves in control. We desire to be like God (Genesis 3:5).We like to think that we can justify ourselves.

Sometimes I hear it said that one cannot be a “gay Christian” as if, somehow, a sexual orientation is the opposite of a religious faith. There is an apples and oranges logical fallacy at work here. One cannot be a gay heterosexual. One cannot be a Christian Muslim. But there is no contradiction in being both gay and Christian.

I recently listened to a sermon in which I heard the preacher say that God will heal Christians of homosexuality. The problem with this idea is that homosexuality is not a disease. Homosexuality is an innate sexual orientation. It is not something to be healed of. Besides, from what I have read, neither conversion to Christianity nor long-term “reparative therapy” is effective in straightening gays.

Again, sometimes I hear it said that one can be gay and Christian but, because homosexual acts are “inherently sinful,” a gay Christian must refrain from having sex. Homosexual Christians must remain celibate. Do you see the subtle works righteousness in this notion? It is as if refraining from gay sex makes a homosexual right with God.


The picture of Martin Luther’s seal in stained glass was taken from the website of Oakbrook Esser Studios.
Posted by Brant Clements at 1:02 PM