The Office of the Keys

A REPLY TO DR. NESTINGEN, PART 2

Do other Christians have a doctrine of the Office of the Keys or is it just a Lutheran thing?

Luther's explanation of the doctrine appears in some editions of his Small Catechism. The 1979 edition published by Augsburg and Fortress (they were separate concerns back then) translated it this way:

What is the "Office of the Keys"?

It is that authority which Christ gave to his church to forgive the sins of those who repent and to declare to those who do not repent that their sins are not forgiven. 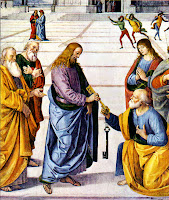 John 20:23 and Matthew 18:18 as supporting texts for the Office of the Keys. In Luther's day, this doctrine had a polemical function. It denied that the Pope alone held the keys to the kingdom.

As I understand it, the authority to forgive or retain sins belongs to the Church, but is entrusted by the Church to its pastors. The Office of the Keys is exercised in the declaration of forgiveness in private and corporate acts of Confession.

In my last post I began to address some of the concerns raised by Dr. James Arne Nestingen's article in the latest issue of the WordAlone Network News. Elsewhere in that article, Dr. Nestingen claims that the ELCA's Churchwide Assembly decisions undermine the Office of the Keys. Nestingen writes:

Married people can and do sin against one another sexually, even while remaining in the bonds of fidelity. For this reason, in the pastoral care of those caught in marital difficulties, pastors must be free to use the power of the keys to bind and loose—to challenge inappropriate behaviors and forgive the penitent.

In other words, the Office of the Keys may be exercised in a case where a pastor is counseling a married couple when one spouse has hurt another. If the offender is penitent, they are to be forgiven. If they are not penitent, their sins can be retained. Nestingen continues:

Nestingen's assertion here seems to flow out of his assumption that non-procreative sex acts are intrinsically sinful. He would like to apply the Office of the Keys moralistically by wagging a finger at anyone who engages in gay sex. I have already argued that gay sex is no more intrinsically sinful than straight sex.

The ELCA Churchwide Assembly decisions regarding sexuality do not undermine the Office of the Keys. They have not placed "homosexual behavior beyond assessment." They simply require a more discerning assessment than the naive formula "boy/girl = good. Boy/boy or girl/girl = bad." Pastors are free to bind and loose the sins by which same-sex partners damage their relationships to one another or to God, just as they are in cases involving heterosexual couples.

Christianity, especially in its Lutheran expression, is not a religion of Law. The Office of the Keys is not about a moralistic application of "shalts" and "shalt nots" concerning sexual acts. It is about the care of souls in their relationship to God and one another.

Obie Holmen has a good post about Nestingen's article at www.theliberalspirit.com. Concerning the Scriptural basis for the Office of the Keys, I like the way Eugene Peterson deals with John 20:23 in his paraphrastic Bible translation The Message: "If you forgive someone's sins, they're gone for good. If you don't forgive sins, what are you going to do with them?"

The detail from Perugino's painting of Christ handing the keys of the kingdom to Peter came from this website.

Posted by Brant Clements at 1:59 PM