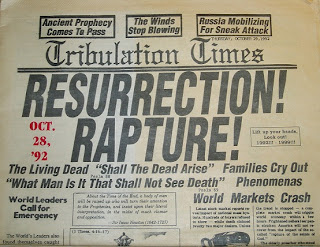 When I lived in the city, I would sometimes buy my Sunday paper late on Saturday afternoon. That’s when the first Sunday edition of the Chicago Tribune hit the streets. Inevitably I would make a pathetic joke about reading the paper to find out what would happen tomorrow.


Some Christians read the Bible as if it contained tomorrow’s headlines. Typically this involves taking a verse or two from Daniel, a couple more from Revelation, a dash of the Psalms, a pinch of 1 Thessalonians, some current events, a little speculation and combining them in ways that the Bible’s original writers would never be able to recognize. In other words, it involves reading the Scriptures without regard to their historical context, their canonical context, or even the context of a specific verse within a book of the Bible.


The photograph above shows a religious tract that I have kept on my bookshelves for about 19 years now. It is in the form of a newspaper, 20 pages long. It was mailed to me by a group called the Mission for the Coming Days. They claimed that Jesus would “rapture” all true believers out of the world on October 28, 1992, leaving the rest of us behind to face 7 years of tribulation.


But you knew that, didn’t you? Everyone who has ever set a date for the rapture, the return of Jesus, the end of the world or what-have-you has been wrong. It’s because they have misused the Scriptures. The Bible doesn’t work that way.


The Bible contains a lot of prophecy, but very little in the way of prediction. Prophecy is God’s word spoken to a specific set of circumstances. The prophet’s goal is usually to inspire repentance. Only occasionally do the prophets foretell future events and even then it is in vague terms. Jesus himself refused to set a date for the end and discouraged his followers from speculating about it.


There were allegedly suicides on October 29, 1992. Members of the Mission for the Coming Days thought that they had missed the rapture and took their own lives in despair. Maybe some of them had given their life savings to the group’s work and were now left with nothing. I don’t know. The group’s leader allegedly went to prison, charged with fraud, when it was discovered that he held investments that did not mature until after October 28, 1992. Again, I don’t know for sure.


I do know that the whole story is a sad case of deception, whether intentional or not.


Now radio preacher Harold Camping and his followers are predicting that May 21, 2011 will be Judgment Day. Camping arrived at that date by using a verse or two from Daniel, a couple more from 1 Thessalonians, a dash of personal revelation, a pinch of speculation...you know the recipe. They are convinced that they are right. I am equally convinced that they are wrong.


In that sense, May 21 will indeed be "Judgment Day." It is the day that Harold Camping will be proved wrong. I am confident of this because the Bible doesn’t work the way Camping claims.


To paraphrase one of my mentors, the Bible does not reveal the shape of the future, but it reveals the One who shapes the future. More to come.
Posted by Brant Clements at 6:23 PM