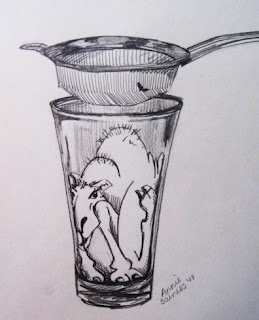 I just counted. There are 38 Bibles in the bookcase beside my desk.* Most of them are different translations. There are several other Bibles around the room and more in my office at church. I also have several electronic Bibles on my desktop computer and a few more on my iPod.

I love the Bible. I read from it every day.

In my last blogpost I raised the question “Who carried the cross?” According to Matthew, Mark and Luke it was a certain Simon of Cyrene. The Gospel of John says that it was Jesus himself. Over at the Progressive Involvement blog, John Petty picked up on my post and expanded upon it. I think he says some of the things I said better than I did. Thanks, John!

In previous posts I have dealt with the questions “How did Judas die?” and “How many angels did the women meet at Jesus’ tomb on Easter morning?” These are just a few of the discrepancies found in the various books of Scripture. Some others: Did Jesus chase the money-changers out of the temple on his last visit to Jerusalem before his crucifixion (per Matthew, Mark and Luke) or was it almost three years earlier (per John)? Did James and John ask Jesus to give them the seats of honor in his kingdom (Mark 10:35 ff. ) or was it their mother who made the request (Matthew 20:20 ff.) ? Did the risen Jesus instruct his followers to return to Galilee (Matthew 28:10) or to wait in Jerusalem (Luke 24:49)?

I could go on at some length, but I think this suffices to make my point. The Bible is not a single book. It is a collection of ancient literature written by a variety of people who sometimes disagree about points of fact and even about theology. We understand the Bible best when we read the books as the writers intended instead of trying to conflate them into a single narrative or force a single theological framework upon them. In fact, the points where the writers disagree are usually the most instructive, for it is there that we learn each one’s distinctive theology.**

I once had a discussion about the Bible’s discrepancies with a man who proudly described himself as a Fundamentalist. I think he was rather frustrated with me when he said, “You just read the Bible looking for errors.”

Maybe these guys do, but I don’t. I read the Bible expecting to encounter God’s word. The contradictions are just there.

Then there was the layperson who told me, “If you just accept the Bible as the inerrant Word of God you will know peace.” I explained to him that I was quite at peace. Peace doesn’t come from reading the Bible uncritically. Peace is a gift of God given through the cross of Christ. I suppose I could try accepting that the Bible is without error or contradiction, but it would not bring me peace. The cognitive dissonance would likely kill me.

So why am I telling you this? It is because I want you to know that you can be a faithful Christian without surrendering your intellect. You can be a believer without denying the evidence in front of your eyes. No matter what some may tell you, you don't have to shut off your brain when you read the Bible. You don’t have to swallow intellectual camels and strain at doctrinal gnats. Jesus loves you.


*That’s English Bibles, not including 6 Greek New Testaments and a Septuagint.

**If you want to follow my thinking a little further, this means that Christian orthodoxy, as defined by the canon of Scripture, insists upon a few basic points but beyond that allows for a range of theological possibilities. So, e.g. Matthew’s Jewish Christianity and Paul’s Gentile Christianity are both orthodox but Docetism and Gnosticism are out of bounds.

Props to Annie Salness who drew the cartoon that accompanies this post. I found it on her blog, here. She has some beautiful artwork. Check it out!
Posted by Brant Clements at 9:09 PM