Who Carried the Cross?

JESUS OR SIMON OF CYRENE? 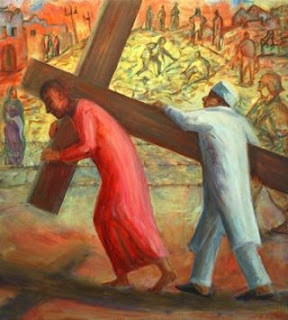 The Synoptic Gospels (Matthew, Mark and Luke) agree that the Roman soldiers who led Jesus to the place of his crucifixion compelled a certain Simon of Cyrene to carry Jesus’ cross. Cyrene was a city in what is now Libya. Mark’s Gospel mentions that this Simon was the “father of Alexander and Rufus” which raises the intriguing possibility that Mark expected his original audience to know who these men were. Luke adds the detail that Simon carried the cross behind Jesus.

It is never surprising that Matthew, Mark and Luke agree with one another. They are called “synoptic” (Greek for “seen together”) because they follow the same outline. Scholars have good reasons to think that Matthew and Luke both used Mark’s Gospel as one of the sources for their own writings. I find it much more interesting and instructive to examine the points at which these three works disagree, because it is there that each one’s unique theology can be discerned.

The Gospel of John is quite different from the synoptics. It follows its own outline and narrates many events and teachings of Jesus that are not found in the other gospels. John 19:17 says quite plainly that Jesus carried the cross “by himself.” Simon of Cyrene is never even mentioned in John’s Gospel. How shall we account for this difference?

Roman Catholics, and anyone else who has participated in the devotion of the Stations of the Cross, will be familiar with the tradition that Jesus fell three times on his way to be crucified. In this tradition, Simon of Cyrene was compelled to carry the cross after Jesus fell the first time. Although the tradition is widely known, it has no basis in the Scriptures. None of the Gospels mentions Jesus falling.

Still, the idea that Jesus started out carrying the cross and that only later Simon was compelled to carry it is one way to explain the apparent discrepancy between John and the Synoptics. It is much the same sort of explanation that my hypothetical Church of Deadwood Dick used to account for a man lighting a cigar and tapping the ashes out of a pipe. As in that thought experiment, though, it might be wise to ask if this is the most reasonable explanation.

The Gospel of John has a high Christology. That is, it presents Jesus as and powerful, much more so than the Synoptics. In John 1:1 ff. Jesus is described as the pre-existent Word of God and as God incarnate. John’s Jesus possesses divine knowledge (2:25). Repeatedly in John’s Gospel (and only in John’s Gospel) Jesus makes “I am” statements which echo the divine name revealed to Moses in Exodus 3:14. (Some of the “I am” statements can be found at John 6:48. 8:12, 10:11, and 11:25, but read the whole Gospel to find them all).

Throughout the Gospel of John, Jesus is depicted as being in charge of every situation. Even when he is arrested, the armed crowd that comes for him falls “to the ground” when he speaks and he is able to demand that his disciples be let go (18:6-9). In John, Jesus’ crucifixion is described as a “lifting up” (3:14, 8:28, 12:32) and “glorification” (17:1). These are all signs of John’s high Christology, as is John’s plain statement that Jesus carried the cross “by himself.”

It is possible to harmonize John’s account with that of the Synoptics’. It is even plausible to say that Jesus carried the cross “by himself” and that Simon of Cyrene also carried it, though I think that this denies the plain meaning of the texts. If one wishes to maintain that the Bible contains no errors or contradictions, then it may even be necessary to resort to such an explanation.


I like Gwyneth Leech’s painting of Jesus and Simon of Cyrene carrying the cross in tandem for many reasons, among them Simon’s north African clothing. I found the picture here.
Posted by Brant Clements at 8:30 PM