Another Note to the Followers of Harold Camping 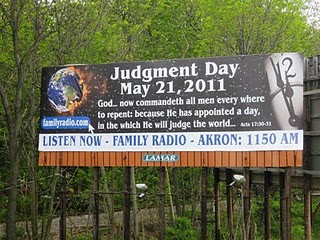 Last July I wrote this post  about Harold Camping’s prediction that May 21, 2011 will be Judgment Day. Almost immediately I got replies from some of Camping’s followers. Not wanting to get involved in a protracted, ugly and pointless debate, I wrote this post stating that I would not allow comments from Camping’s defenders. When I check my blog stats, I’m surprised to see how many hits those two posts get. Yesterday, I added yet another post touching on Camping’s end time prediction.
I will, at least tentatively, allow May 21sters to comment on this post. I will be moderating  carefully, however. Please keep your comments short and try to address a single point. No matter where you stand on Harold Camping, please be polite and do not impugn anyone’s motives.
If you believe Harold Camping’s teachings, I imagine that you are getting pretty excited about now. May 21 is close at hand. I know that you are convinced that you will be raptured out of this world on that day. I am equally convinced that you will not. We don’t need to debate this. A very short time will show who is right.
I am concerned for you, though.
If you find yourself still on earth on May 22, please don’t panic. Don’t assume that you have been left behind. Don’t worry that the horrible tribulations that Camping has predicted are going to fall upon you. They won’t. You will still be here because there will have been no rapture. There will be no tribulations. So, first don’t panic.
Don’t despair either.  The world will go on and you can go on. You can start over. The God of Jesus is a God who gives second chances. Read Luke 13:6 ff. Pick up. Bear up. Move on.
Remember that you are only human. Human beings make mistakes. You made a mistake in believing Harold Camping. That’s all it was: a mistake. Forgive yourself. God forgives you.
Remember, too, that Harold Camping is only human. I know that their is a certain mathematical logic to his teachings, but the most rigorous logic will yield false conclusions if it begins from false premises. Harold Camping has made a mistake. Forgive him, but don’t follow him. And don’t get fooled again.
Give up speculating about the end times. It is fruitless. It always has been. Everyone who ever set a date for the end of the world has been wrong. Jesus warned his followers against such speculation. Begin to live in the now. Love God and do good.
Finally, go back to church. I know that Harold Camping has told you that salvation is no longer available in the churches. He is wrong about that, too. In a good church community, you will find welcome and forgiveness. You will hear the good news that God loves even human beings who make mistakes.
God bless you.


I borrowed the photograph of a Judgment Day billboard from this website.
Posted by Brant Clements at 4:27 PM