OR, HOW I SPENT MY MOTHERS DAY 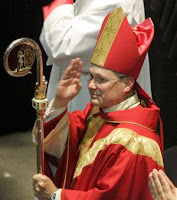 Yesterday, after a Mothers Day luncheon with my mom and mother-in-law, I had the privilege to attend a service of "Solemn Vespers in anticipation of the Episcopal Ordination of the Reverend Monsignor David J. Malloy, J.C.L., S.T.D. as the Ninth Bishop of Rockford." I was there as a representative of the Northern Illinois Synod of the Evangelical Lutheran Church in America. My Bishop, Gary Wollersheim, was not able to attend.

I was running close on time and had to park three blocks away from the Cathedral of St. Peter in Rockford. I hurried along and entered the cathedral just behind a group of four priests. A woman wearing a name badge greeted us. "Fathers this way," she said.

"Oh, this way," she said. Taking me by the wrist she hustled me to the very front of the sanctuary and led me to a pew with a sign taped to its end.

I was seated between 2 aldermen.

The service was conducted with a high degree of professionalism. We sang a hymn and intoned three psalms. There was a brief reading followed by a "Welcome by Rector, Father Carl Beckman, to Ecumenical and Civic Leaders." I stood as my name was called. "We are honored by your presence," the rector said to all of the leaders. I'm not used to being treated as a dignitary.

Next came a homily by retiring bishop Doran. Then Bishop-elect Malloy made his profession of faith and oath of loyalty.Bishop Doran blessed Msgr. Malloy's miter, crosier, and ring, the insignia of his new office.  We sang the Magnificat. as the altar was censed, prayed intercessions and recieved a triune benediction.

The Ecumenical and Civic leaders were ushered into a reception hall where we were given a gift, a handsome glass paperweight which I have given to my own Bishop. The Bishop-elect greeted us individually. As I shook his hand, I gave him greetings from Bishop Wollersheim and assured him that we in the Northern Illinois Synod would pray for him.

Later, as I walked the three blocks back to my car, I found a dollar bill in the street. All-in-all it was a good day.

Something I noticed: when Bishop Doran handed his crosier to anyone else, they did not touch it directly, but held it with a cloth. Can anyone tell me whaddup with that? The photo of Bishop Malloy, at his ordination, came from the website of the Rockford Register Star.