Philip and the Ethiopian Eunuch

WHOM WOULD YOU EXCLUDE?

To begin, this Sunday's first reading:


An angel from the Lord spoke to Philip, “At noon, take the road that leads from Jerusalem to Gaza.” (This is a desert road.) So he did. Meanwhile, an Ethiopian man was on his way home from Jerusalem, where he had come to worship. He was a eunuch and an official responsible for the entire treasury of Candace. (Candace is the title given to the Ethiopian queen.) He was reading the prophet Isaiah while sitting in his carriage. The Spirit told Philip, “ Approach this carriage and stay with it. ”

Running up to the carriage, Philip heard the man reading the prophet Isaiah. He asked, “ Do you really understand what you are reading? ”

The man replied, “Without someone to guide me, how could I?” Then he invited Philip to climb up and sit with him. This was the passage of scripture he was reading:

Like a sheep he was led to the slaughter
and like a lamb before its shearer is silent
so he didn’t open his mouth.
In his humiliation justice was taken away from him.
Who can tell the story of his descendants
because his life was taken from the earth?


The eunuch asked Philip, “Tell me, about whom does the prophet say this? Is he talking about himself or someone else?” Starting with that passage, Philip proclaimed the good news about Jesus to him. As they went down the road, they came to some water. The eunuch said, “Look! Water! What would keep me from being baptized?” He ordered that the carriage halt. Both Philip and the eunuch went down to the water, where Philip baptized him. When they came up out of the water, the Lord’s Spirit suddenly took Philip away. The eunuch never saw him again but went on his way rejoicing. 40 Philip found himself in Azotus. He traveled through that area, preaching the good news in all the cities until he reached Caesarea. (Acts 8:26-40) 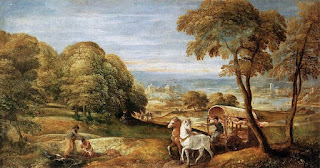 I’m really not clear on just what the Ethiopian eunuch was doing in Jerusalem. The text says that “he had come to worship” but, as I understand it, he would have been barred from any meaningful participation in Jewish worship. As an Ethiopian he was probably not Jewish. He may have been a God-fearing gentile, but as a eunuch he would not be allowed to become a proselyte, a full convert. And as a eunuch he would not have been allowed to participate in the ritual of the Jerusalem temple.

At any rate, Philip told the good news of Jesus to the Ethiopian eunuch, and when they came upon water in the wilderness (resonant as that phrase is with imagery from the Hebrew Scriptures), the eunuch asked, “What is to prevent me from being baptized?” The answer, apparently, was “Nothing.”

That answer was not good enough for some early Christians. By the second century, a verse had been added to this narrative:

Philip said to him, “If you believe with all your heart, you can be.” The eunuch answered, “I believe that Jesus Christ is God’s Son.” (Acts 8:37, rightly relegated to a footnote in modern Bibles).


I think I can understand the impulse behind this added verse. We can’t go around baptizing people willy-nilly, can we? But in some ways this is a troubling addition. It undermines one important point of the story. The Ethiopian eunuch was an outsider. Rules and regulations had kept him from participating in worship of the Lord, the God of Israel. In Jesus Christ, God was now reaching out beyond the borders of Israel to include even an Ethiopian eunuch among the people of God. The most marginalized, the most excluded, were now being brought into the fold, and nothing...NOTHING...could prevent them from being baptized.

Someone has said that whenever we draw a line to exclude people, Jesus stands on the other side of the line. Jesus stood on the side of the Ethiopian eunuch. Who does Jesus stand with today?

Some Christians exclude women from roles of leadership in their churches. In those churches, Jesus stands with the women. Some churches marginalize lesbians, gays, bisexuals and transgendered individuals. (An unseemly fascination with genitalia persists among God's people to this day). In those churches Jesus stands on the LGBTQ side of the line. I am convinced of this.

But here is where it gets tricky for me. Although I am convinced that it is wrong to exclude or marginalize women and LGBTQ individuals, I find that I want to exclude and marginalize the Christians who disagree with me on these issues.

If you are the kind of person who checks out parenthetical Bible references...(Isaiah 56:1-8). Scripture quotes are from the Common English Bible. I snagged the image of Lambert Sustris' 16th century painting of Philip baptizing the Ethiopian eunuch at wiki.