A Reflection on Pastoral Ministry

IN WHICH WE REVISIT PHILIP AND THE ETHIOPIAN EUNUCH 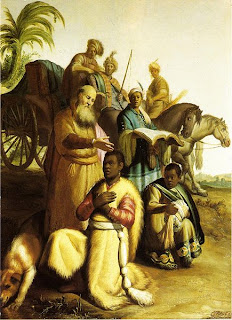 My sermon yesterday was based on the story of Philip and the Ethiopian eunuch from Acts 8. I drew on some of the same ideas that I had also used in this post. The main point of my sermon was that the Gospel of Jesus Christ welcomes the outcast and invites into the kingdom of God those whom we might choose to exclude.

Now ours is a small congregation. We really have only one child member, a bright and inquisitive 10 year old girl. Saturday evening, going over my sermon, I decided that I'd better call her mother.

"I don't usually run my sermon past anyone before I preach it, but I thought you should know that tomorrow I'll be talking about the Ethiopian eunuch. I don't want to raise any awkward questions for you. I don't plan to explain what a eunuch is, but I plan to say, 'One form of genital mutilation was required for a man to enter the temple; another form of genital mutilation would keep him out.' I'll find a way around it if you want me to."

She thought about it before she said, "That should be OK. She's at that age where she's curious about sex. We try to give her honest answers. If she asks, I think we can handle it."

No one had signed up to serve as lector yesterday. That didn't worry me. I have members I can call on at the last minute and trust that they will do a good job. I drafted a woman to read before the service started. The assigned lection uses the word eunuch about five times. My last-minute lector was doing a great job, but the third time the word came up, she stopped, looked at me, and asked, "How do you pronounce that?"

Did I mention that ours is a small congregation?

She finished the readings. The congregation began singing the Alleluia verse as she stepped down from the dais. I stopped her for a second and quietly asked, "Do you know what a eunuch is?"

So, a few minutes later, I found myself in the pulpit, departing from my notes.

"I wasn't planning to do this, but I think I'd better explain about eunuchs. A eunuch is a man who has been fixed the way a cat or dog is fixed."

There is no deep meaning in this blog post, just an acknowledgement of something that my colleagues in pastoral ministry knows: Sometimes being a pastor is a lot of fun, but even when it's not fun, it is always interesting.

Oh, and a request for any laypeople who happen to read this: please pray for your pastors. They, after all, pray for you.


I snagged Rembrandt's painting of Philip and the Ethiopian eunuch  from wiki.
Posted by Brant Clements at 4:08 PM