How Do You Solve A Problem Like Junia? Pt. 5

THE FEMALE APOSTLE LOST AND FOUND IN TRANSLATION

My study of Romans 16:7 has led me to the conclusion that Paul referred to a woman, Junia, as "prominent among the apostles." I have also concluded that "apostle" here means a person in a position of authority. Junia has often been translated out of existence, either by making her name masculine "Junias" or by making her "well-known" to the apostles. In the chart below, I look at Romans 16:7 in 24 English versions of the Bible. A few of the versions listed are actually significant revisions of earlier versions (e.g. NASB 1e and NASB 2e =New American Standard Bible 1st and 2nd editions).

I have tried to restrict myself to translations that were produced by committee.

The Versions are listed by year of publication. Multiple versions published in the same year are alphabetized. "X" indicates the reading of the main text; "f" indicates a variant reading included in a footnote. So, for example, the New American Standard Bible, 2nd edition uses the masculine name "Junias" in its text and relegates the feminine name Junia to a footnote. NASB 2e further calls "Junias" a "prominent apostle" and takes no notice of the variant translation "well-known to the apostles."

A few ancient Greek texts have a variant reading that replaces the name "Junia" with "Julia." This is not a significant, but is footnoted in some translations and is so noted in the last column of my chart.

I think that the chart shows graphically that the masculine name "Junias" was not used in English translations before the late 19th century. It was widely used through much of the 20th century but has now largely been abandoned. Three recent doctrinally biased English versions have adopted the suspect reading "well-known to the apostles." The chart shows that this is a new translational strategy.

Following the chart is a key to the abbreviations used for the various versions, including my own remarks about each one. 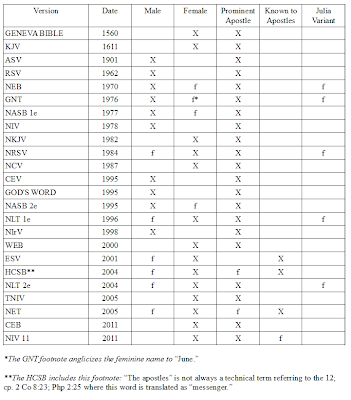 KJV: Commissioned by King James I on his ascension to the throne of England, the Authorized or King James Version was intended to combat the popularity of the Geneva Bible. Slow to catch on, the KJV came to rule as the English Bible for about 300 years. Its influence can hardly be overestimated. KJV Onlyists make extravagant claims for this translation. Changes in English usage and discoveries of many ancient biblical manuscripts have rendered the KJV nearly obsolete.

ASV: The New Testament of the American Standard Version was based on Westcott and Hort's critical edition of the Greek New Testament. The ASV retained the archaic language of the KJV. Never widely popular, the ASV has largely lapsed into disuse. A curious feature of the ASV is its use, in the Old Testament, of “Jehovah” to render the name of God.

RSV: A bestseller when first published, and the center of considerable controversy, the Revised Standard Version was based on the best critical Greek and Hebrew texts available. This academic translation was made by an interfaith team of scholars that included Jews and Christians. The RSV rendered the Scriptures in modern English but retained archaic forms (“thee,” “thou,” “hast,” etc.) in poetic passages. The RSV was criticized by some for (rightly) rendering the Hebrew 'almah as “young woman” in Isaiah 7:14 and (again rightly) omitting interpolated verses (like Acts 8:37) that had appeared in earlier translations. The RSV is the version that I heard read in church as a child and I have a special affection for it.

NEB: The New English Bible, a British translation into thoroughly modern English, was printed in single-column format with verse numbers relegated to the margins. It looked, and in some measure read, like a modern novel. The NEB has now largely been replaced by the Revised English Bible (REB).

GNT: Formerly known as the Today's English Version (TEV), the American Bible Society's Good News Translation was made according to the principle of “dynamic equivalence.” Idiomatic and highly readable, the GNT has now grown a bit long in the tooth.

NASB 1e (also second edition): The New American Standard Bible was translated according to a strict principle of “formal equivalence” which often makes its English renderings forced and unnatural. Each verse is printed beginning on a new line, meaning that there are no paragraphs in the NASB. The second edition represents a considerable revision of the first. I rarely consult this version.

NIV (also NIrV, TNIV and NIV 11): The all-time bestselling English translation of the Bible, the New International Version was in some ways, an Evangelical response to the popularity of the RSV. The NIV has been criticized for its doctrinal bias (e.g. it renders 'almah as “virgin” in Isaiah 7:14). For many people raised in Evangelical churches, the NIV is the Bible. The translation style steers a middle course between dynamic and formal equivalence. The NIrV (New International Readers' Version) is a closely related translation into simplified English. The Today's New International Version adopted more inclusive language and was the focus of sometimes vituperative controversy. The original NIV and the TNIV have now been replaced with a 2011 revised New International Version (NIV 11). Because of its inclusive language and more academic bias, the NIV 11 has been rejected in favor of other translations by some of the old NIV's supporters.

NKJV: The New King James Version is something of an oddity, a fresh rendering of the texts behind the KJV into more modern English. This is the Bible distributed by the Gideon Society. A formally equivalent translation, I find the NKJV useful for checking my own, rough translations from the Greek.

NRSV: The New Revised Standard Bible is my go-to Bible and the one I read in worship every Sunday. A revision of the old RSV, the NRSV uses more inclusive language. It is frequently quoted in scholarly publications. Though no translation is perfect, the NRSV is as good as any and better than most. It is, however, written at a fairly high reading level.

NCV: Written at about a third grade level, and originally intended as a children's Bible, the New Century Version is a very readable translation.

CEV: The Contemporary English Version, another publication of the American Bible Society, is rendered in simplified English and avoids using theological terms. The CEV is an easy read.

GW: The God's Word translation was largely the work of Lutheran Church Missouri Synod scholars, though it is not officially a publication of that church body. (The LCMS keys its publications to the ESV, see below). Rendered according to a dubious translation philosophy, GW never seems to have achieved much popularity.

NLT 1e (also Second edition): Based on the style of Ken Taylor's popular Living Bible paraphrase, the New Living Translation is a pleasure to read. Highly idiomatic, the translation sometimes shows doctrinal bias (e.g. at Isaiah 7:14 'almah is rendered “virgin” though “young woman” is a footnoted). The second edition of the NLT (NLT 2e) was a substantial revision.

WEB: Here's a curiosity. A public domain translation based on the old ASV. Its textual basis for the New Testament is the Byzantine Majority text, closer to the KJV's underlying text than the ASV's Westcott and Hort Greek text. The World English Bible is a work in progress though the New Testament is said to be complete. Where the ASV translated the name of God as “Jehovah” in the Hebrew Scriptures, the WEB uses the more correct “Yahweh.” Personally I prefer the convention of rendering God's name with Lord printed in small caps.

ESV: Less a translation and more a doctrinally biased “correction” of the old RSV, the English Standard Version was greeted with undeserved enthusiasm by some sectors of Christianity. The ESV's translation team was made up predominantly of Calvinists and complimentarians. I think that it was intended, at least partly, to give Evangelicals a viable alternative to the NIV. As you may have inferred, I do not like the ESV. Still, because it is stylistically so close to the RSV that I was weaned on, I can't help but enjoy reading it.

HCSB:The Holman Christian Standard Bible is published by the Southern Baptist Convention's Holman Bible Publishers. When the HCSB was first published, SBC president Al Mohler said, “This is an important thing for Southern Baptists to do, if for no other reason than that we will have a major translation that we can control.” The HCSB steers a middle course between dynamic and formal equivalence. Among the recent doctrinally biased translations that make Junia “noteworthy in the eyes of the apostles” the HCSB is alone in footnoting the (correct) alternative “outstanding among the apostles.” I quote here from the online text of the HCSB. The text in my copy of the Apologetics Study Bible varies.

NET: The New English Translation has a liberal copyright policy. It is largely a product of the Dallas Theological Seminary and reflects that institution's “conservative” theology, especially in its thousands of translators' notes.

CEB: Published in the 400th anniversary year of the KJV, the Common English Bible reads at the same grade level as the USA Today newspaper. I have enjoyed reading this “academically rigorous” translation. Some of its idiosyncratic translational choices are enlightening (e.g. “the Human One” for “Son of Man”). A few are just strange (“DNA” for "seed" at 1 John 3:9). Overall, this is a worthwhile translation.


Readers: I would appreciate your help and feedback. If you have any corrections or additions for the chart above, please make them in comments to this post. I would particularly like to know how Romans 16:7 is translated in some versions I don't have access to, in particular the Revised English Bible, the Jerusalem Bible, and the New Jerusalem Bible. Thanks!
Posted by Brant Clements at 7:53 PM