How Do You Solve A Problem Like Junia? Pt. 2

JUNIA GETS A SEX CHANGE 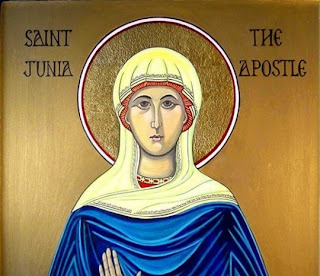 In Romans 16:7, St. Paul gives a shout out to the apostles Andronicus and Junia, two persons who are otherwise unknown. Andronicus is a man’s name. Junia is a fairly common Latin woman’s name. This being the letter to the Romans, the appearance of a Latin name is not terribly troubling. The appearance of a female apostle on the other hand....

Christians who do not allow women positions of leadership in their churches have used at least three strategies to deal with the problem of a female apostle. The first is simply to deny that Junia is a woman.

Personally, I favor the ordination of women. I am a member of the Evangelical Lutheran Church in America which allows both women and men to serve in every office in its congregational, synodical and churchwide expressions. My concern here is not to defend my position or the ELCA’s but rather to raise a question of honesty in biblical translation.

Martin Luther was not a fan of women’s ordination. The reformer wanted to restore the catholic church to what he thought was a pristine, biblical theology. In his reforms, Luther did not try to do away with all tradition, only those traditions that stood in the way of the clear proclamation of the Gospel. The catholic church in Luther’s time had no tradition of ordaining women, so Luther’s churches did not ordain women. Luther’s commitment to Christian freedom made him admit that, in theory, under dire circumstances, women might serve as pastors. He did not, however, think that feminine voices were suited to preaching. That’s about as enlightened as Martin Luther got on the subject.

When Luther translated the New Testament into German, he added a masculine article to Junia’s name and referred to Junia and Andronicus as “men of note among the apostles.” Effectively, he gave Junia a sex change. Or at least a grammatical gender change.

It really isn’t that hard to change Junia’s gender. It’s as easy as changing an accent mark in the Greek text. Accent the name one way and it is the feminine Junia. Accent it another way and it becomes the masculine Junias. Since accent marks were not used in Greek manuscripts until the 10th century, how can we know which form the name should take? To the impressive evidence of ancient translators and commentators that Junia was a woman, we can add the fact that the masculine name Junias is unknown from ancient documents.

Junia was a common name. The name Junias didn’t exist.

From the time of Tyndale until the latter half of the 19th century, every English translation of the New Testament used the feminine name Junia in Romans 16:7. Then, probably because they did not believe that a woman could be an apostle, translators began using the masculine name Junias. In 1927, Nestle's critical edition of the Greek New Testament accented Junia's name as if it were masculine, relegating the feminine form to a footnote. Later editions dropped the footnote. For most of the twentieth century English translations, including the Revised Standard Version and the 1978 New International Version, said “Junias.”

The most recent critical editions of the Greek New Testament have restored the feminine name Junia to Romans 16:7 and newer English translations, such as the New Revised Standard Version and the 2011 revision of the New International Version have followed suit. Even those translations made by “conservative” (read “masculinist”) translation committees, such as the Holman Christian Standard Bible, the New English Translation, and the English Standard Version, translate Junia's name in its feminine form. (These three versions use a different strategy to solve the problem of Junia. Watch for my next post).

In short, the evidence that Junia was actually a woman is overwhelming.

Arguments that she was not a woman are based in circular reasoning: “Our doctrine says that women cannot be apostles. Junia was an apostle. Therefore Junia was not a woman.” The premise that women cannot be apostles is unproven, and, in fact, Junia herself is a counter-example. Giving her a sex change, or even a grammatical gender change, is unwarranted. It's a matter of reading doctrine into translation.

I got the picture of St. Junia the Apostle, here.

Since I am participating in the Common English Bible blog tour, I should point out that the CEB renders Romans 16:7 correctly: “Say hello to Andronicus and Junia, my relatives and my fellow prisoners. They are prominent among the apostles, and they were in Christ before me.” This has been a long post, so if you have read this far and are the first person to reply to this post, you can be the winner of this week's CEB giveaway!

Posted by Brant Clements at 7:30 PM