How Do You Solve A Problem Like Junia? Pt. 1 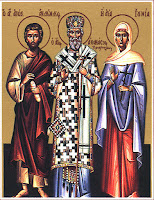 I’ve said before that the Apostle Paul’s letters are high context documents. That is, they assume a great deal of shared knowledge between the writer and his intended audience. Some of that knowledge is, after a span of nearly two millennia, lost to us. For example, in the sixteenth chapter of his letter to the Romans, Paul wraps things up in his customary way with a series of personal greetings to various individuals. For most of those individuals, the little that we know of them is to be found in Romans 16. This is the case with Andronicus and Junia.

Say hello to Andronicus and Junia, my relatives and my fellow prisoners. They are prominent among the apostles, and they were in Christ before me. (Romans 16:7 CEB)


Andronicus is a male name and Junia is a female name. Some commentators speculate that Andronicus and Junia were a married couple, but this is purely a conjecture.

When Paul calls Andronicus and Junia his relatives, he may mean that they are Jewish, like himself. Some translations (e.g. the New Living Translation and the New International Version) reflect this interpretation. It is an interpretation nonetheless. Andronicus is a Greek name, but that doesn’t mean much. Some Jews had Greek names.

Paul seems to suggest that he, Junia and Andronicus were in prison, possibly together. The details of their imprisonment are unknown and, to be honest, I wonder if Paul wasn’t using the term “fellow prisoners” in some metaphorical sense.

Paul says that Andronicus and Junia were “in Christ before” he was. It is probably safe to assume this means that they had adopted the Christian faith before Paul did. Probably.

That is all that we can know about Andronicus and Junia. That, and the fact that Paul calls them “apostles.” Therein lies the problem.

If you don’t see the problem, God bless you!

Some Christians do not allow women roles of leadership in their churches. This can range from reserving ordination for men alone, to denying that women can even read theScriptures aloud in the assembly. For such Christians, the idea that Junia, a woman, could be an apostle, is problematic.

Looking at the Bible as objectively as possible, I think that there are passages in both testaments that affirm women in leadership roles, and passages, especially in the New Testament, that express the equality of men and women in Christ. There are also passages that say women should be silent and submissive to men (1 Tim. 2:12). In other words, the biblical witness is mixed. Junia becomes a problem for those Christians who insist that the Bible is one inerrant thing.

In my next few posts, I intend to discuss some of the flawed solutions that have been applied to the problem that is Junia.

The icon of Junia, along with Andronicus and Athanasius, came from wiki. For the record, I believe that qualified women and men should be allowed to serve in any position of leadership in the Church. That's the way it is in the Evangelical Lutheran Church in America.
Posted by Brant Clements at 5:17 PM