And Now The Day Is Done

Since my last brief update I have attended the final plenary session of the Lutheran Ecumenical and inter-religious Representatives Network, a meeting that was devoted mostly to business.

Then I hiked over to the Oklahoma City Memorial and briefly toured the hauntingly beautiful, achingly sad ground. Tomorrow, April 19, will be the 17th anniversary of the bombing, an act of domestic terrorism, that destroyed the Murrah Federal building and killed 168 people.

A group of us gathered across the street around a statue of Jesus weeping on ground once occupied by the parish house of St. John's Catholic Church. There we held a service of prayer.

Next we toured the Museum which tells the story of that tragic day and its aftermath. I got a little choked up more than once. The Oklahoma City bombing is a testament to the depths of human depravity and a witness to the courage, the goodness, and the faithfulness of which our kind is capable.

I ate a few hors d'ouevres at a reception following the Museum tour. I listened to 1-1/2 of the three speeches that were made but then finally hit my limit and slipped out quietly to walk back to the hotel.

Tomorrow will be the last events of the 2012 National Workshop on Christian Unity and another long day of travel to get home.

I think I'll finish this glass of wine, do a little packing, and get some sleep. 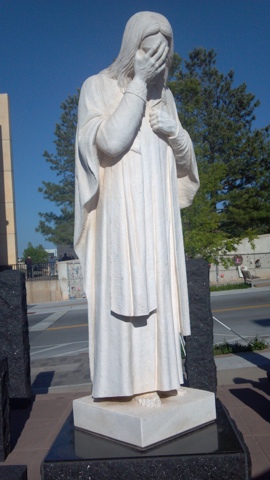 Posted by Brant Clements at 9:42 PM

Email ThisBlogThis!Share to TwitterShare to FacebookShare to Pinterest
Labels: NWCU2012